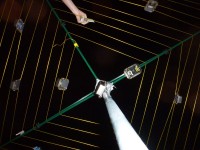 CUOC kickstarted Lent Term with a MicrO on Jesus Lane! It proved to be quite challenging, with only one competitor not mispunching at all. Indeed, there were controls in many obscure, exciting places. One was more than 2m up a lamppost! Two were on a rotary washing line decorated with at least 20 trick controls! And three were in a cave! Many of the competitors were unfamiliar with the control description sign for cave, because it's rare to come across them when orienteering in East Anglia! Another unfamiliar symbol was that for 'one-and-a-half-way' doors.

There are three types of doors:

Andrea afterwards pointed out that there is a fourth type of door and lots and lots of them: zero-way doors i.e. walls. The MicrO was made all the more exciting by live results on a screen in the kitchen and after eating lots of veggie chilli, we even had a prize giving ceremony. What a great way to start the term!