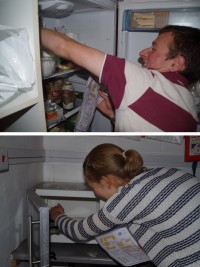 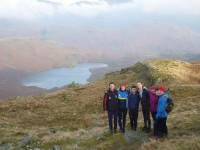 This year CUOCâ€™s Christmas tour once again returned to the Lake District. This time we were based near Ulverston in the Rookhow centre which had a great common room with a real fire and a very nice warden who even gave us a Christmas tree! A huge CUOC turnout of 23 absolutely smashed Oxfordâ€™s feeble attempt by exactly 20 people. Unconventionally, there was no snow to welcome us to the Lake District; instead we were greeted by boring almost dry weather. It wouldnâ€™t be training tour without a bit of rain though, so the last few days assured us that we actually were in the wet Lake District, since as the last people were finishing during the tour champs it was pouring down with rain. During the six days that we were there, there was no shortage of training opportunities in amazing areas (far surpassing what we are used to from Cambridge!), ranging from marshy woodland to sand dunes and open fells, but always accompanied by the ever present contours that we get to see so rarely!

And highlights? Aside from awesome training every day, the already well-established fell run/hike on the rest day didnâ€™t fail to impress. Last yearâ€™s blizzard was replaced by beautiful weather with amazing views across all of Lake District. Among other highlights were the night score race; Matthewâ€™s traditional Micro-O with controls in such obscure places as the microwave, fridge and rubbish bin; and for some, the Alc-O was met with great enthusiasm. Weâ€™ve also had some innovations this year with our very own first official circuits session. This year the tour was not only Christmassy in name but in reality as well. With the control kite-decorated tree leading the way for CUOC-style Christmas decorations, we managed to put on a full scale Christmas dinner. The turkey weighed 8kg, took 90 hours to defrost and 4.5 hours to cook but in the end it was worth the effort! The â€œnine ladies dancingâ€ in 12 days of Christmas was improved to say â€œnine orienteers runningâ€ instead but otherwise we stuck to the traditions!

We got a chance to show off our newly polished orienteering skills at the tour champs which returned to Great Tower this year. With Carrie planning, Katrin took the first spot on the womenâ€™s course and Matthew won the menâ€™s course. Hopefully weâ€™ve done enough training to beat Oxford at Varsity in Sweden! Based on their turnout, it certainly does seem so ;)