After a few choruses of You & Me (the perfect wake up call for an orienteering holiday), we finally headed over to the main hut to make our vat of porridge. Surprisingly, we left on time to get to Ishavet for the days training.

Ben had planned 4 exercises, though unfortunately only 3 made it out to the area... Nevertheless, "running on hills" and "boulder-like things" were good training for the optimal terrain choices (over the ridge or through the valleys) and distinguishing how various features look in Scandinavian terrain. The use of butterfly loops helped to instil confidence and provided the opportunity for some head to head racing. 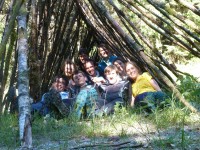 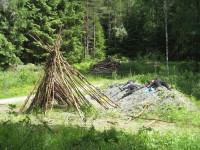 During the lunch break, we built a wigwam which we hope will appear as an X on the next version of the map. We managed to get everyone inside and take a photo without it collapsing.

In the afternoon we had "Simplification Dan-style", though his courses were shortened to just 5km as everyone was feeling a bit tired. We trialled a control closing time with the collection the estimated timings would have been almost perfect, except they hadn't accounted for Matthew messing up, so he got back 5 minutes later than planned! He also can't count to 23 since he missed one out and had to go back to collect it... thankfully it wasn't that far away! 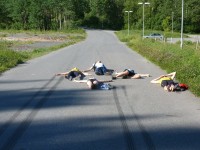 After going for another swim, John wanted to see if he'd lost weight on tour so tried Carrie's top for size. Unfortunately he had underestimated his weight loss and had to be helped out of it. Sadly, there was a bit of an accident on the way back when we chose an unsuitable spot to dry...

For the third evening we dined outside, though it was good that we had planned to since a 'party' was taking place in the hut (there was bunting, but we observed a distinct lack of people). Courtesy of OK Moss, we were able to have a lavish BBQ under clear blue skies. Head Chef Matthew grilled the meat until the gas ran out, whereupon he finished the remaining meat by frying it in the kitchen and was very grateful for the absence of any smoke alarms. The meal finished with large quantities of waffles, which were gratefully devoured. Afterwards, everyone reported feeling very full!

Fortunately, the party had ended early, so there was time to squeeze in the traditional hut MicrO, complete with controls inside the showers, sauna, fridge, dresser and boiler, under the shed and mattresses and up the tree just to name a few of the many exciting locations. Live Results were displayed on the TV in the start arena (though sadly our budget does not stretch to GPS tracking as well), and motivational music blared out from the speakers using a selection of orienteering themed songs for the watching crowds and competitors visiting the spectator control. We concluded that You & Me is still the best orienteering song though! Some competitors reported sabotage out on the course, with stiff doors and missing shoes, whilst others struggled with flexibility, width or height to get the controls behind the boiler, in the narrow gap and on the high ledge. Check out the RESULTS to see how things went.