Despite our relaxed attitude to this intense training camp / holiday, we have still managed to get out into the forest everyday, which is more than can be said for the BOF tours of recent times...

We lugged 7kg of SI out to Arvolltangen, only for the master box to break this morning, now rendering the entire kit useless. At least we managed to get a MicrO out of it last night!

We started the morning with a chasing sprint, which ended up more like Carrie & Dan chasing John! Thankfully none of the control locations were consumed by the forest fire. Some runners were lucky enough to see the fire fighters in action, though sadly they were too efficient for us to get a selfie with them - they were just leaving when our camera crew arrived!

The final was won by John, who despite setting off last still managed to get back first. We relaxed in the sunshine before an inventive exercise planned by Zuzka - a pairs exercise where each person only had half the controls on their map, meaning relocation was necessary to navigate to your next control.

A water collecting expedition turned into a safari when a giraffe and green cow were spotted, adding to the wildlife count for the day of a moose and 2 grass snakes spotted during the training. This was followed by the daily swim where we saw some pirates when drying on the warm rocks. In keeping with the relaxed timings, we lay on the rocks rather longer than we thought... 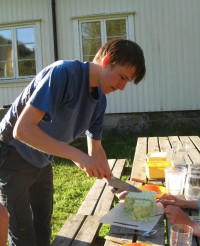 We arrived back at the hut to the smell of freshly cooked Vege Chilli. This was followed up by copious amounts of ice cream, traditionally carved up on a chopping board. According to the box, we ate an average of 5.5 portions each! There is no way that we are going hungry on this tour (at this point Zuzka said "I'm quite hungry, can we have some cake?"), unlike certain other tours.

The evenings entertainment is being provided by the Jukola Live Stream (when it works). So far we have seen a feature on NOT OK, laughed as the cameraman fall over and watched a club called KOK on the live tracking. It is quite quiet this evening as Dan & HQ have left, Helen also left on the last train last night, so we are now down to 6.