The day started with a more successful attempt at making toast with the grill before we ventured out into the forest for a final day of training. 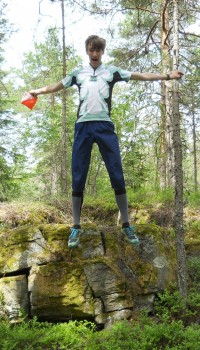 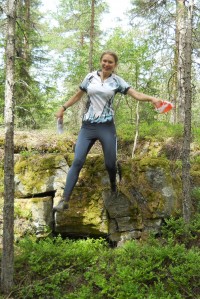 John had planned an exercise (that we never got round to doing on the first day!) utilising the "flat runnable forest" we also experienced in Stockholm, though this time there was a little bit less of it! Other parts of the forest were very green (thanks John for putting a control in the middle of it...)! Matthew sighted 2 moose/s (or is it meese?!), though sadly scared them away before Fiona arrived. Fiona did however find a second patch of ripe bilberries for another mid-training snack.

We spent the last hour and a bit in the forest taking pictures and making videos for the upcoming new CUOC video, this time the "jumping off things" was more successful than 3 years ago - no ankles were harmed in the making of these films. We hailed our success with a celebratory meal of all the leftovers - lasagne & ice cream, plus experiment no 5: the chocolate biscuit cake, which has by far been the most successful of all our cooking experiments (mainly because we actually followed the recipe better)!

After giving the hut a good clean, we managed to fit in a bit more orienteering on the way to the station - OK Moss had set a Foto-O around the town centre (requiring different photos to be matched to each control location). Unfortunately, the photos were a little more obscure that we had hoped and despite finding 10 of the locations, we only managed to match 3 photos. We could have spent longer looking at each control (a good couple of hours would have been nice), but we had a train to catch! We made it to the station with 7 minutes to spare - plenty of time to buy both tickets and the obligatory ice cream.

With Rygee airport taking just 15 minutes to get through, we relaxed whilst planning a theoretical MicrO using the map in the airport magazine, this time with controls such as Rum & Passport Control, and perhaps most conveniently, aeroplane! After watching virtually all passengers board, we allocated ourselves an entire row to sit in yet again and watched Norway disappear beneath us. Back in the UK, we sped through the UK Border at Stansted in record time (less than 1 minute!) and uploaded this report from the rather flatter rocks of Stansted Airport train station platform (but thankfully they are still sunny!)

It has been a fantastic week of training, great forests, great #company , great food - when will it happen again next?! Thanks to OK Moss for letting us use their hut and all of their maps!