This yearâ€™s BUCS competition took place in the cold and hilly terrain of Edinburgh, and saw CUOC represented (beautifully) by Joe, Helen, Sam, Dan and Natalie. The location meant many hours driving for Joe, while Helen correctly predicted that Sam and Dan would be sleeping on her shoulders for most of the journey and Natalie drifted in and out of consciousness in the front seat. On Friday night we prepared for the weekend ahead with some hearty carb-loading at Bella Pizza (the first place Iâ€™ve seen that serves chips as a pizza topping), except for Dan who chose to fill up on cold rice and a block of brie.

The next morning we rose early to drive another couple of ours to the race site while Helen did her best to keep Dan in order (sadly he was ignoring the advice written on the motorway road signs â€“ 'Belt up in the back!'). Joe cleverly timed our arrival to the second, ensuring that he and Natalie had to properly warm up by running to the start box just in time for their numbers to be called. The courses themselves covered a mixture of ground that ranged from completely un-runnable to very un-runnable to not exactly what you wouldnâ€™t call un-runnable terrain. The often knee-high undergrowth provided a constant challenge, while the many swamps kept us sufficiently cold and wet. Natalie won the title of longest time out on the course (> 2.5 hours) and but unfortunately lost a toenail in her efforts, meanwhile the rest of the team did themselves proud and secured 13th place for CUOC in the overall competition. 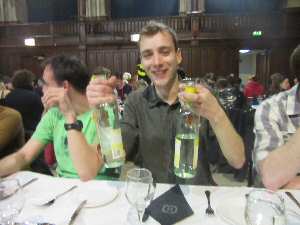 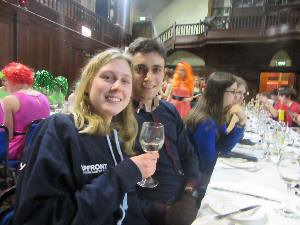 On arrival at our hostel for the night we discovered that the organisers were sneakily trying to sabotage our performance in the relay by not booking us a room. After some waiting around in the cold we managed to sort of a room, but were left with very little time to get ready for dinner. Once again Helen took the lead and ensured that all CUOC members showered as efficiently as possible, then dressed in our fantastic costumes (x-men in disguise as ordinary Cambridge students) we made our way to the hall. At dinner CUOC introduced the Glasgow and Nottingham teams to the Cambridge traditions of pennying and 5-pennying (demonstrated with style by Sam and Joe). Joe tried to prove that he could hold his alcohol (by picking up two bottles of wine and a pint of beer) but sadly he couldnâ€™t hold it for long and spilt some of Sam and Helenâ€™s wine on the table. Natalie also tried to hold more alcohol than she could handle after befriending the notorious ShUOC, and around midnight had to be nursed back to health by Helen. In spite of the late night disturbance, the whole team were ready and some-what raring to go the next morning.

The relay race took place in freezing, sleety conditions, making the most challenging element of the day actually leaving the nice warm car. Once out on the course the ground was nice and runnable, in stark contrast to the day before, although muddy ditches and stone walls made some legs feel like an obstacle course. Everyone seemed to enjoy the race, and all our runners put on a good show - even Joe who decided that taking his compass with him would make things too easy. Unfortunately a hung-over Natalie forgot that white means forest, not clearing, and left the map for a fair while, but in true CUOC style she didnâ€™t quit! ShUOC officials were so scared by our menâ€™s teamâ€™s performance that they actually forced Sam to quit before the end of his leg. A sad use of underhand tactics, but we were not disheartened and began the long trip home in good spirits.

The return journey was long and uncomfortable as our tired muscles stiffened. Suddenly things took a dramatic turn: Helen lost her patience with a disruptive Dan and tried to crack his skull with ruby the rubix cube. Thankfully Dan survived the brutal attack, and we all made it home safely. All in all, a successful weekend!