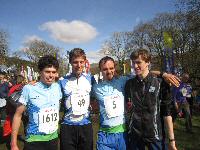 The first part of the course was in a wood with some intricate vegetation detail. John made a good start to the course by messing up number 1 and relocating off number 2. For those with late starts, the wood had tracked up and in places there was knee deep mud. The course then went out onto the fell for a few controls. Whilst the fell had some intricate contour detail, visibility was very good, and it was much easier to predict where the control should be found.

The courses then went back into the wood over quite a steep stile. Runners had to dip their shoes in a tray of muddy looking water (possibly containing some disinfectant). Compared to the mud, the tray was very shallow and didnâ€™t try to keep your shoes. After a few more controls in the muddy wood, the road crossing and drinks point we got to the bridge.

It was good to see that some Scandinavian influence in orienteering had finally made its way to the Lake District in the form of a scaffolding bridge across one of the rivers. Admittedly, the bridge was nowhere near as wide as the ones that are built at O-Ringen, but the effort was much appreciated.

Then there were then some controls in a slightly less muddy and less steep wood. One of the controls seemed to have a Jon Marsden at it, but the control wasnâ€™t marked as a manned control. Perhaps he likes to sit and look at controls â€“ he canâ€™t have spent enough time looking for them in the forest. (Apparently he was waiting for the last CUOC elite runner to pass through so he could take the special SI box away). The courses then had a vertical leg with a large proportion of the courseâ€™s climb, a contouring leg, a few descending legs and then the run-in leg.

Dan has said that he definitely doesnâ€™t want anything bad written about him on the CUOC website. Apparently potential employers might use a stalking agency to tell them about all the times Dan is mentioned on the CUOC website. At this point I must point out to any stalker agencies (or whatever you call yourselves) that there are hundreds of people in CUOC called Dan, and that you must be sure to identify the correct one.

To see what a stalking agency might see, we did a google image search for Dan (and his surname). The first image is a Rubix cube from Danâ€™s twitter account. The second image is from the plant sciences department directory. Then we get to the interesting part: Dan appears to be a transvestite singer in his spare time.