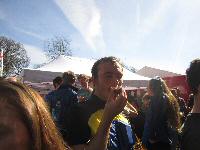 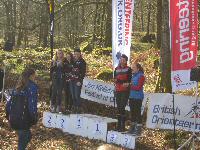 Despite the best effort of John to negotiate a student discount for a CUOC relay team, the stubbornness one 'official' meant he wasn't successful. As the maps had already been purchased, the NW orienteering clubs lost out on making a bit more profit from the race, and there were unused teams.

Fortunately John and Dan (or is that Dan and John?) managed to find spaces in a BAOC team. Carrie ran as part of a LOC team, and Helen was in a LVO team. Miranda does not appear in the results so presumably went home

Men's Short was class C which caused some amusement with the printed bibs. John was on first leg, and came back in a reasonable 18th place. Dan had a good run (6th on leg) and brought the team up quite a few positions. Calvin (BAOC) brought the team home in a very respectable n/c 6th. Unfortunately the team didn't quite catch the LVO team (which had Helen's brother in it). Fortunately he might be in CUOC next year. Good luck with your exams Paul. OUOC finished in 12th place, so good work there!

Carrie was running in the Women's trophy class (which had rather boring bibs), and brought her team back in 7th place on the first leg. Good runs by the other two LOC members meant the team finished 2nd, and Carrie was on the podium.

Helen competed in an LVO team with her younger sister and someone else. Rory took part in the Men's very very short class, which involved walking to the finish and taking pictures. Hopefully we will get hold of some of them for the journal and website.

Dan and Carrie are getting a lift back to Cambridge with the Woods, Rory is driving home, Helen is going back to NI and John is going to collect some controls. I think everyone has had an enjoyable weekend of orienteering - see you all back in Cambridge.

Dan probably did something amusing today or yesterday but I can't remember what it was. Anyway #Dan