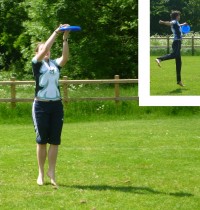 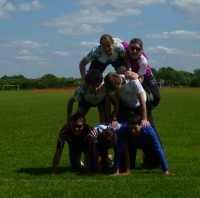 On a beautifully sunny Sunday in the middle of most people's exams, 8 CUOCers turned up to train on a rather out of date map of Coldham's Common. For the first exercise this didn't matter however, since it was aimed at practising accurate compass bearing and was just a course on a white background! This proved very difficult, even for the planner and control hangers!

This was followed by a balloon relay, where orienteers had to complete a series of short loops whilst carrying a balloon. If the balloon got popped on the loop (and popping other people's balloons was encouraged) then the forefeit on return to the start was to touch a control in a tree, and blow a new balloon up. Ben Windsor was first to the finish area, but had a burst balloon and Dan Safka came back with a fully functioning balloon to win the balloon relay before Ben had completed the forefeit!

This was all followed by a picnic and game of frisbee!