Home > News > Alex and Ed at the KIMM
Log In

Alex and Ed at the KIMM 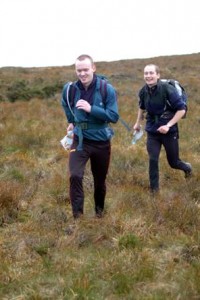 So, quite taken with this whole mountain marathon thing, Ed and Alex join the brothers Elder in the Lake District in October for the KIMM. A worryingly large amount of rain on the Friday evening thankfully clears up, and Saturday morning dawns merely damp and overcast. One thing you can say about mountain marathons is that the chances are you won't get sunstroke. Things run relatively smoothly for the first two-thirds of the day, barring an unbelievably bad route choice and Alex sliding down a section of hill on his arse, slicing a considerably-sized bit off his thumb in the process.

But, unfortunately, at about two-thirds through things start to go seriously pear-shaped. Alex ambitiously tries some multi-tasking by looking at the map whilst running diagonally down a hill, and after a second or two of apparent success is left sprawled on the ground, clutching his ankle, and making pained-sounding noises. Things start moving considerably slower from this moment onwards, and a lot of time passes before the campsite is reached, whilst moving at a fast hobble.

Getting the tent up just before the rain arrives, all that remains is to cook dinner, which is only achieved by Ed doing a rather fine impression of a wind-break, showing considerable commitment to the idea of inedible 're-hydrated' pasta. Mmmm, crunchy. Thanks again Travel-lunch!

After a sleepless night watching the tent inflating and deflating in the wind, and a considerable amount of ankle-strapping, it's time to embark upon day two. In the interests of not depressing the readership, all that will be said about this day is that the combination of rain, wind, and ankle pain made the whole experience pretty grim! But still, limping into the finish on Sunday afternoon, it was agreed that the weekend had been a pretty unforgettable experience. Roll on LAMM 2006!

All that remains to be said is that mountain marathons are absolutely fantastic fun, and really have to be experienced before you can pass judgment on whether you'll enjoy them or not! There'll be a CUOC contingent heading to both the LAMM and the KIMM in 2006, and it'll be great to see as many of you there as possible. You won't regret it!

If you don't feel up to going straight into a two-day race, there will also be some CUOCers at the Lake District Mountain Trial over the summer, which is a similar race (navigating around hills) but takes place on only one day, and has a short version of the course on offer. What better introduction to the world of mountain navigation competitions? Get in touch if you're interested in coming along to any of these races with us!