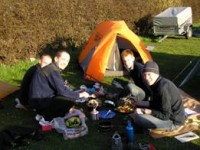 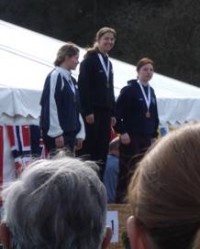 For the first time in quite a few years, a number of CUOCers decided to attend this yearâ€™s â€˜Jan Kjellstrom International Orienteering Festivalâ€™ a club. Iâ€™ll leave you to decide whether this was a sign of increasingly sociable behaviour within the club, or just a shameless act of self-promotion. Although, for half the club, the weekend nearly didnâ€™t happen. The CUOC ladies clearly had too much faith in each otherâ€™s organisational skills, and managed to book precisely zero tent spaces between them, only realising once the campsite was fully booked. Luckily, the men of CUOC did not trust each other at all, and had managed to book a space each, and (with some gentle persuasion) could be convinced to part with one of them.

Day 1 dawned bright and sunny on the steep slopes of Illkey Moor. The terrain was rocky with some intricate contour detail in places, which meant that any lapses in concentration would be punished. Damn. Performance of the day had to go to Alan,purely for his run in, where he decided not only that running down the river seemed to be a good route choice, but that he should slide down the hillside on his back in front of large numbers of spectators to get to the river, taking the finish tapes with him. And yet still managed to get the same run-in split as Chris. A true Patrick-Elder performance

Day 2 was held at the marginally flatter Keldy. CUOCâ€™s numbers were somewhat reduced, with neither Ian nor Alan feeling in a fit state to run (hopefully nothing to do with my attempt at cooking the previous night). It was generally a pretty good day for the survivors, with Alex and Nicola moving significantly up the standings in M21L and W21S, and Chris and Ed consolidating their day 1 performances in M20E and M21L. Elspeth was the star of the weekend, with two comfortable victories to take the W20L title by a pretty impressive 15 minutes! I tried my hardest to ruin a solid day 1 run by somehow missing the big taped entrance to the finish field, and thinking the fence between me and the last control was uncrossable, spent 5 minutes thrashing around in the dark green stuff in full view of all spectators just after the announcement â€œand weâ€™ll be expecting our first finisher very shortlyâ€¦..â€. Oops. But at least I got a cream egg from the nice people at the finish for my troubles!

That night, we abandoned all pretence of being self-sufficient campers and went to a much hyped local chippie before showing off all of the hard work put in at BUSA to improve our ceilidh dancing skills. Unfortunately, being a bit of a cripple, I was unable to join in, which really messed up the male/female ratio, despite the fact that Alan had decided to spend most of the night in the company of the portaloos instead. Fortunately for the lonely CUOC men, Chris agreed to be Alexâ€™s lady (and what a lovely couple they made!). There was also some high speed manoeuvring from Ian and Ele on display (primarily designed to avoid the camera), and a couple of hairy moments where children and loudspeakers were sent flying in the enthusiasm of the dance!

The next day was the much more serious matter of the relays, and how to get our team names announced by the commentators! The men thought they had cracked it straight away as all of the team names were read out one by one before the mass start. Unfortunately, they were just â€˜a team from Cambridge Universityâ€™ rather than â€˜Edâ€™s Happy Spankersâ€™. The womenâ€™s team decided that if they were going to be noticed, they were going to have to do it the hard way and get on the podium. However, it was not to be, with â€˜Edâ€™s Happy Spankettesâ€™ finishing a creditable 7th out of 41, just over 2 minutes away from that elusive 3rd place.

So, would we do it again next year? Definitely! A great weekend was had by all, and CUOC has titles defend, plus a team name or two to get announced on the loudspeakers!