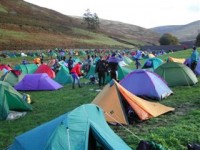 "You're taking bananas. On the KIMM?"

"Yeah, well we had a Positive Banana Experience when we were training in the Lakes, OK?"

In light of his all-Go Bar diet, Ash didn't seem too impressed with our choice of energy food. Nonetheless, Al and I had faith in the iconic yellow fruit (or berry, or nut, or whatever the hell it is). It had hit the spot perfectly four weekends earlier, when we whipped ourselves into shape on Helvellyn (I was shocked to learn yesterday that Helvellyn is the third highest peak in England. And someone landed a plane on the summit (and took off again) in 1926. Damn, this is a flat country). Besides, we were about to find out that it's much easier to eat than a Go Bar in subzero temperatures too. Yep, it was that weekend again: the Karrimor International Mountain Marathon; "Adventure Racing At Its Finest". The venue for this year's KIMM was the Cheviot Hills, and a record number of particularly masochistic CUOC types turned out. Must've been all the glowing reports they'd read in the last few CUOC journals.

The scene was set for the Big Burn-Up on B, with Bown/Kestle, Elder/Whitehouse, Pooley/Plogander-Zakrisson and Elder/Patrick all fancying their chances. With Warner/some-random-bloke-called-Sinclair looking for C grade honours and Collis/Sengerova in on the Medium Score action, CUOC was looking good for fame, fortune and everything that goes with it.

Saturday dawned fine. Really, really fine. A Positive Barometric Experience - and those of you who have done a few KIMMs before will know how rare they are. Looking to capitalise on our early start time and the good weather, Elder was off like a bride's nightie. At least as far as the first fence, where some ill-covered barbs put a dent in his ego and a rip in his Â£50 Lowe Alpine waterproof trousers. Hate it when that happens. Still, there was no route choice to speak of to the first control, and with a grand total of six controls on the 25 km Day 1 course, we felt like we were getting stuck in from the outset. By the time we began the 6.5 km leg to number 3, we had edged past most of the relatively few teams that started before us. On the ascent up a long ridge, we dropped all of them except one team, "The Purple Jackets". Can't remember now why we called them that. Anyway, they seemed determined to stick to us like purple glue, and that in turn drove us on. We punched 3 ahead of them, but as the sun bore down (!) and we started the 200 m climb onto the ridge we needed to take us to 4, they slipped past. Like one of those woolly mammals for which (I'm told) my country is famous, I urged Elder to follow them.

"Nah, mate. We want to sidle around further to the left". But Alâ€¦they're getting away from us!

"No point gaining extra height. Can you get some food out of my rucksack?" Alright, alrightâ€¦we'll sidle. Just shift your arse!

As we crested the ridge, I learnt an important lesson: Al can navigate. Having done an extra 50 m climb on their direct, non-sidling route, The Purple Jackets were powering down the hill, not 10 yards away. The race, it seemed, was back on. Four was easy, and we punched in front. We stayed ahead of them up the hill to five, but as we started down the ridge to the last control, it was clear that they were gaining on us. Fast. Luckily, I happened to know that no matter how tired he gets, the Men's Captain can never resist trying to kill himself at high speeds down steep hillsâ€¦ (see the 2002 journal) suffice to say, the precipitous descent to control 6 and the finish was, umm, rapid, and The Purple Jackets were left ruing the day they got in the way of the Big Burn-Up on B.

The biggest advantage in having an early start time is that you get to the overnight camp early. This increases the likelihood that you'll find somewhere dry and sheltered to pitch the 850 g, incredibly flimsy, high-tech tent. And this in turn decreases the likelihood that you'll have to find Â£120 to furnish Alex Rothman with a new one, should you happen to destroy it in a 2-knot zephyr. So it was with some degree of confidence that we made camp in the shelter of a rather solid-looking farmhouse. Moreover, and unbeknown to us, on unpacking the toothpicks - no, I mean pegs and poles - we were in for a Positive Blue Experience: none other than Alex's Blue bow tie, safely stashed for emergency use only. "If you're going to travel, travel in style", as my old grandpa used to say.

The omens looked good for Light Blue triumph. Unfortunately, however, ShUOC pot-hunters Crane and Middleditch had other ideas, and had already cleared out to a 24 minute lead after the first day. Ash and Ryan were lurking in 4th place overnight, though, and Al and I were a further seven minutes back in 7th place - all comfortably in the chasing start for Day Two. Rachael and Pippa missed out on the chasing start (for those within an hour of the course leader) by a mere 12 seconds, but had already established a big lead in the Ladeez race. Emma and Anna got much better value for money on their run, and also had by far the best overnight accommodation: a one-person bivvy sack thingy and a small amount of bubble wrap. It had to be seen to be believed, really. On the other courses, Claire and Random Bloke had a blinder to lie 3rd in C grade overnight, while Blanka and Mark appeared to be in the Not Enough Points For Certificate zone on Medium Score. All set up for a tantalising second day, then. But first, what to do for the long, long afternoon?

"You gotta be f@%king kidding!"

In light of his all-ReGo rehydration strategy, I don't think Ash was expecting to see the can of fine Mancunian bitter that emerged from my rucksack. Still, in keeping with all this acronym bullshit, it seemed appropriate that Al and I should saviour a Positive Boddington's Experience. Made the pasta snacks go down a treat, after all, and we hardly even noticed that it was beginning to rain.

The weekend was, in the words of A grade winner Nick Barrable, a "meteorological dichotomy". Where the danger on Saturday had been sunburn (OK, so that's a little optimisticâ€¦but some of you Poms do have pretty fair skin), we awoke on Sunday morning to find that the bottom third of our tent was a muddy lake. The cloud was down, it was cold and the rain was persistent. The only way to console ourselves was to go and visit Emma and Anna, who had passed an utterly miserable, wet night huddled in sitting positions inside their little shelter thingy. Our spirits lifted immediately.

As Ash and Ryan departed in the chasing start, I was hopeful that the poor weather would play into our hands. The worse it got, I figured, the greater the advantage to be had from Al's navigational prowess. The 7 km leg to number 4 seemed a case in point: by midway across the long traverse, I had given up trying to read my map through the raindrops and condensation in front of my eyes (almost a good enough reason to get contact lensesâ€¦), and I could feel my blood sugar levels dropping in the wind and rain. Even worse, some uncovered barbs promptly put a dent in my ego and two rips in my Â£50 Lowe Alpine waterproof trousers. Hate it when that happens. We reached for the Go bars, only to find that in the cold they go sufficiently solid that the energy required for mastication is considerably more than what they can provide.

Cometh our darkest hour, cometh our yellow saviour. Powered by the last of our bananas (Once famously advertised in New Zealand as "Energy high; calorie low". If you know your scientific units, you might find that amusing), Al led the way to the control, even glimpsing Neil Northrop and Helen Palmer (2nd overnight) disappearing into the distance. Control 5 was characterised by the gale force winds that made it hard to stand up to punch it; control 6 was a short but nasty leg down into the valley and straight up the other side. By the top we were knackered, and number 7 looked a long way off. After a short discussion about route choice, Al rashly assumed that my brain was working, and I lead the way down into the valley on a rather convoluted course. On reaching the river crossing at the base of the climb to the control, things looked a little exciting. The river was in flood, and a rickety fence across it looked like a death trap. Further upstream, a bridge across one tributary was on the verge of being swept away. Al gamely stepped up, edging his away under a fallen tree and along the slick, sloping planks of the teetering bridge. My turn. It lurched, but held. A Positive Bridge Experience? Maybe, but if we hadn't been so tired, it might have been more akin to a Petrifying Bridge Encounter.

The climb to the penultimate control seemed never-ending, and by the time we got there all thoughts had turned to getting to the Finish for a cup of something hot. Luckily, it was all downhill to number 8 - not even a broken shoulder strap on my rucksack could stop us now. The interminable 2.5 km run to the Finish was covered at extreme pace (about 17 minutes, I think). And with that, it was all over for another year.

So what else had been happening out there in the mist? We'd hardly seen anyone all day, and certainly didn't notice when the Purple Jackets slipped past us on their way to 5th place overall. While we held onto 7th, Ryan ran Ash into the ground as they managed to catch, hold and eventually edge past Siggy Gould and Janine Hensman for a stunning 3rd overall. Rach and Pippa extended their lead in the women's race, to end up 14 minutes clear of the nearest (veteran) female team. It was a long day at the office for Emma and Anna, but they still did enough to finish 7th in the Ladeez category. Things went slightly awry in the mist for Claire and Random Bloke, but they still finished a highly creditable 10th place (3rd mixed team) on the C course. The big movers on Day Two were Blanka and Mark, who improved over 30 places on their overnight position to narrowly miss out on a certificate (for 250 points or more) on the Medium Score course. All in all, a most enjoyable (if a little crazy) weekend, with success aplenty for CUOC. Personally, it was definitely a Positive B grade Experienceâ€¦any takers for a repeat of the Big Burn-Up in 2003?