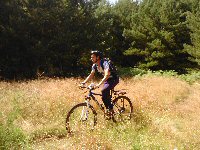 The usual faff was compounded by the train to Brandon being unexpectedly cancelled. John fixed his bike, Ben planned the bicycle course whilst I tried to draw proper circles.

Unfortunately, poor route choice led to a significantly longer cycle back to the station. With minutes left to go, Ben took the opportunity to make a quick dash to Aldi for cheap ice cream that was surprisingly decent. More train delays meant an opportunity to lie on the tarmac/concrete before the ride back, whilst enjoying the ice cream.

Back in Cambridge, we made a pit stop at Sainsbury's before heading over to Johnâ€™s for dinner, Pimms and lying on the grass to top a nice day out.