After an overnight stop at what Dan described as a mansion, CUOC and a few DrongO members made the final stage of the journey to Scotland to run in the Scottish 6 Days and to spectate at the World Orienteering Championships (WOC). Some people went to help and spectate at the Sprint Relay in Nairn. 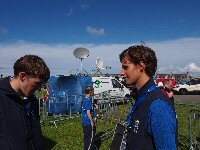 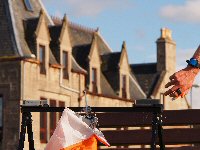 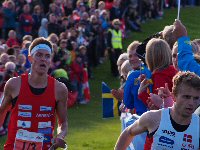 The first competition of the S6D used part of the area used for the S6D Day 6 in 2013. The terrain was gently undulating with interesting vegetation and contour detail. There were some really log marshes (or marches if you are Dan) that you had to run through, and lots of flies to make sure you didn't stop running. The start of the M21E course in 2013 was very similar to a section of the course this year, with one of the controls in exactly the same place! Even more coincidentally Ben Stevens took the same time of 1 minute 55 seconds for the similar legs in 2013 and 2015!

After finishing courses, everyone headed to Forres to help at the WOC Sprint Final. The TV tents were positioned in a very good place for us to watch the spectator run-through and the finish. The TV crew showed some impressive skills keeping up with the WOC athletes and might also have been better at hurdling fences (ouch!).

Day 2 was held in a grotty area to the SW of Inverness with lots of bracken and rough terrain. James was hoping that a hilly course should mean that there weren't too many marches. However marshes in Scotland can be on slopes. As the WOC athletes were having a rest day, no AutoDownload screens needed to be changed and we were able to leave the race earlier than other days. John decided to stay a night at the bunkhouse to see how it compared to the campsite. However this meant getting a lift with Matthew and Fiona and stopping at the supermarket on the way. A â€˜#raceâ€™ around the supermarket was formed by distributing the items on the shopping list. Fiona thinks she won the race but John disagrees. Lots of items were bought in bulk quantities including the entire stock of value instant custard powder.

Back at the bunkhouse we played giant jenga and a game a bit like articulate. Fortunately James doesn't have a basement in his house. Raphaelle and the other French people cooked a nice meal with a surprising resemblance to 'pie des shepherds'.

We were given a break from competing for a day, so focused our attention on the WOC Middle Distance. It was an interesting race to watch, with many athletes (including Egyptians) making mistakes. A good performance from Cat Taylor (even with a mistake) brought her back into 5th. 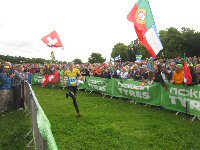 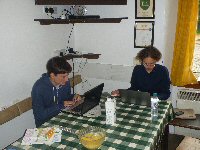 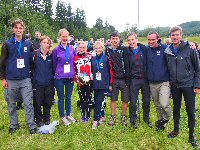 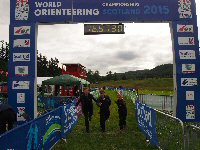 Day 3 was a day of intensity; a middle distance race and spectating the relay. Fiona had planned a MicrO at the bunkhouse. As the SI kit was not available she had used every pin-punch CUOC had in stores. There were 80 controls in the area, of which 30 were in use. The following two mornings, Dan complained about having slept on something uncomfortable. James made everyone in his car do some extra training by parking as far away from the supermarket as possible despite the availability of other (narrow) parking spaces.

Day 4 was another day in Darnaway. This time we were in a different part of the forest but it was still really nice.

Most of the DrongO helpers had their start times adjusted so they could be more helpful at WOC. This had the disadvantage that they were the first in the forest and making the tracks. In some parts of the forest there was certainly a course 41 track between controls. A slight accident with the WOC minibus meant that the starts had to be delayed by 20 minutes. Don't drink and drive.

Dan was determined to get a group photo with Thierry Gueorgiou, however he wasn't fast enough and Thierry preferred talking to less scary children instead. Fiona had a conversion (some words in Danish) with Ida Bobach and arranged for us to have a photo taken. Ida is about the same size as Sarah. Perhaps Sarah should do some training?

With the long race finished, WOC was over and we could unplug some cables and go home to rest up (particularly for the elite courses) for the epically long last day

Discussions the previous day about this race had generally focused around the length of time we would be out in the forest and the possibility to join the exclusive 200 club. Fortunately the terrain proved to be much nicer and whilst the courses were still challenging they were much better than Affric South. John and James were close during several points in the race, and the person in front changed when mistakes were made. John had the lead going back into the wood 80% around the course, but slowed down after the drinks control. Ben S and James then caught up and managed to hold the lead down the hill and through the last section to the finish.

All in all a good week of racing, even if some of the terrain was a bit grotty. Rory and Fiona have shot up the BOF rankings now they have 6 scores.