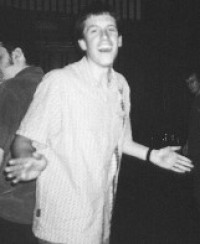 The individual race took place on Touche Estate, near Stirling, on a mix of open moorland and woodland of varying runnability. Rock details were a prominent feature of the map, as were contour markings (in excess?).

One particularly large climb on the men's A course was visible from the assembly area from which athletes were both encouraged and jeered at down a microphone. Alan did not stop up the hill (either because he knew that we were watching him or maybe because he's a bit of an animal?) and pushed onwards to finish 17th on the highly competitive men's A course.

The women were glad for a lack of spectators (apart from the many athletes we overtook). Cath and Jules set off early and watched the provisional results board with interest as more athletes returned and their positions started to slip. They eventually came to a halt at creditable 12th and 14th places respectively. This was not the case for Rachael who stormed into the lead and stayed there, taking the women's gold medal by over two minutes.

Mark ran in a rather stylish yellow o-top (possibly to frustrate the other competitors by being clearly visible but too speedy to catch). He was on top form, ending up 9th overall.

There was full Cambridge participation in the Celidh that evening, which proved to be more tiring for some than the orienteering itself. Alex joined us in time for the disco, having competed in the modern pentathlon Varsity Match for the previous three days. Unfortunately we were still two men short of a beer-race team, but we ensured that sufficient alcohol was consumed to make up. After several hours of dancing everyone collapsed in the hostel (a somewhat unique converted church) where some attempts were made to steal each other's bunk-bedsâ€¦

On Sunday, the Scottish weather reverted to normal (after all Scotland would not be the same without drizzle). Fortunately for the 40 odd teams, impaired by countless hangovers, the course was flatter (phew) and the navigation was relatively straightforward.

In the men's relay, strong first and second legs by Alan and Alex saw Mark set off in 4th place, behind Sheffield, Edinburgh and Oxford. Good performances from Jules and Cath followed, which sent Rachael out in 2nd place on the last leg of the women's relay, just 2 minutes behind Oxford.

When both Rachael and Mark came into view at the spectator control, victory over the Dark Blues was clearly ours (again). Mark finished in the bronze medal position, a massive 11 minutes clear. Rachael, hungry for further success, raced round, almost knocking over Oxford's Rachel Holmes at the second control and coming home five minutes clear of the field to record the fastest time of the day.

With medals all roundâ€¦what a weekend, what a team!