In this report, Tom drives a Ford Focus, Rory drives a Ford Fiesta and John reviews the Toyota Yaris. Wait, Top Gear have already done it; it's official - the Corsa is better than the Yaris. Anyway - time for the news... 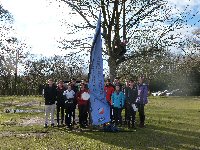 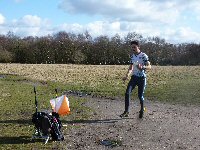 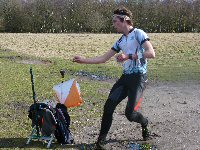 While everyone else got a lift, Joe had a train ticket back to Lancaster so it seemed sensible to use it. He arrived in a muddy car park to find a proud DRONGO banner flying in the wind, and a bunch of cold looking CUOCers trying to match this achievement. It transpired that the wind (which was brisk, but far from unexpected for British winter) had snapped the CUOC pole in 2 places. After some faffing, including electrical tape, a plastic fence post and string, it was decided that the best approach was to hang it from a tree. Helen P was swiftly dispatched up a tree with a ball of string while Joe looked away so he could deny all accountability if she fell out. 15 minutes later, the banner was up, in a sort of limp manner and it was decided that DRONGO hadn't being taken for a ride with their more expensive pole (which survived unharmed).

The courses good fun and made use of all the best parts of the map, with lots of interesting legs. The good variety of (quite runnable) terrain on the map was a highlight, with about 3 very different areas, each requiring different skills. Jonathan's run got off to an interesting start when he picked up the all controls map on the top of the pile. Although initially he thought this may have been some kind of extra sadism for the VM, he fortunately went back to the pile and picked up a more traditional course map. Otherwise it was a fairly standard run, consistently a bit slow but no huge errors, which was good. On the 14 to 15 leg I lost a bit of time in a classic case of race day distraction when Jake and I both led each other off the map onto the golf course, obviously both assuming the other knew where they were going. There was a good mix between the fast woody area north of the railway, and the open, park section, although some on the longest course (probably John) complained there was too much in the open. Overall Jeremy said his run was acceptable, if a little slow from some poor route choices. One particular control (171) caught many people out, with the vegetation boundary, in some fairly dense wood, difficult to spot from the path.

Armed with the new CUOC banner, tied to a tree by Helen P (and Helen the reindeer), we braved the cold to watch our fellow CUOCers coming in. We made a strong effort cheering each other on - Oxford spectators werenâ€™t matching our enthusiasm. We adopted the technique of cheering whenever we saw a runner and then trying to figure out who we were cheering for. Notably, it took Helen P a good 30 seconds to recognise her own brother! We refuelled from our runs by eating sweet potato cake for Paulâ€™s Birthday. It had been baked for 4 hours in an oven with a broken door but it still somehow remained very tasty! 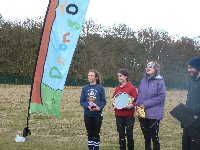 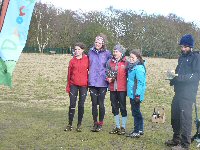 The individual prize giving was held in the arena as soon as everyone had finished. The top 3 on the Men's and Women's A courses from CUOC/OUOC, and the top 1 from DRONGO/JOK were allowed to choose their prize, with chocolate proving much more popular than wine. Helen Hanstock won the Women's alumni trophy, which was lucky because she hadn't brought it to the prize giving. The overall varsity results were announced, with CUOC winning in the Women's class and OUOC winning in the Men's. The prize giving didn't stop once all the trophies had been handed out though, as CUOC members were awarded a place to stay for the evening.

The various accommodation options had unfortunately fallen through, but in the name of the all-important social OUOC had kindly offered floor space. This meant that everyone was going to different peopleâ€™s houses; in the vast metropolis of Oxford these were not within walking distance of each other, so a few people had to switch cars to get to the right place. After a certain amount of faffing, a relatively arbitrary table of OUOC hosts and CUOC guests was drawn up. Then we drove down to Oxford to marvel at the tall buildings and bridges (so many bridges) and get lost among one-way systems, pedestrian zones and construction sites. 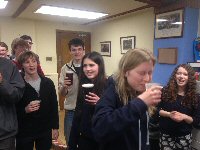 The optimistic plan for dinner was to eat in at 6:15 in New College Hall, however it was clear when the last of the CUOCers were being dropped of at the finest accommodation Oxford has to offer that this would not happen. So it was left up to captains Helen P and Jamie Parkinson to organise a new dinner plan. They decided on Spoons but this led to a second problem of their being two spoons in Oxford, one of which proved too full to take the 30 hungry Orienteers. Eventually we squeezed everybody on about 4 4-person tables and ate our fill of burgers chips and fried goods. Once everyone's needs were sated, whether those needs were for food, alcohol or for the furniture to be arranged in such a way as to maximise space, it was just a short walk to the other Jesus College for the boat race.

After Spoons, we headed to Jesus College where we played some intense fussball before the long-awaited boat race. Miss PruÅ¾ina began, impressively dispensing with her half pint. Impressive that is, given what her namesake achieved next. By the time Miss Ockenden had finished her pint (with some help from her brother), Oxford were down to their last two men. Paul managed to down his pint faster than any of us thought humanly possible, giving credence to the controversial theory that gravity is in fact the strongest force.

We went to Teddyâ€™s Hall who let us in but was unfortunately home to an Eton/Harrow/male-exclusive/rugby/cricket/drinking/ladsladslads society of some sort who were singing some delightful tunes in a room adjacent to the bar. Ben later persuaded them to sing â€œHappy Birthdayâ€ to Paul, because it was his birthday that day. You can't fault the logic. After some nice cocktails and ice cubes, we decided to go to the Gluteus Maximus club. The remaining Drongonians left at this point (Zuzka had already ninjaâ€™d away without anyone noticing). On the way, Helen P encouraged everyone to do the starry-dizzy game to which most people sensibly refused due to the concrete underfoot. Sam appeared popular with the ladies (probably because he was wearing a nice shirt), although the ladies were less popular with Sam. Helen R decided to join in the fun and danced the night away with us to some reliably generic dance music.

Neither of the cars made it to the car park by the agreed time of 10 am, but still we had a lot higher success rate than Oxford, as only Jack braved the rain (and our company). Well done Jack! Jamie provided us with plenty of different courses, so we could take our pick. In the end, most people decided to do trains. The area was ok and made for some good map reading training. After the training, John kindly entertained us by telling a looooong story about Clare's ghosts.

Ben made veggie chilli on Sunday evening. Dave only came because Millie Map was going to be there. Helen nearly came for the washing up but in the end everybody else did washing up in shifts. Matthew attended via the phone. There wasn't as much rice in Ben's cupboard as he expected so there was a mixture of rice and pasta, and mango chutney also made its debut chilli appearance. A couple more people also got to meet crusty for the first time.