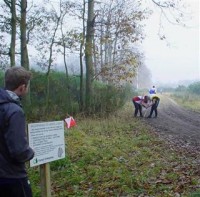 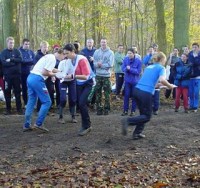 Saturday 16th November dawned bright and clear over Mildenhall Woods. Fortunately I wasn't there to see it but several poor souls (Rosemary, Blanka and Alan) were, having been out from some unholy hour hanging controls. By the time we arrived, bleary-eyed in the death-trap minibus (its designer had obviously learned much from tin cans, without having mastered the knack of scaling sizes), most of the work seemed to have been done. All we had to do was psyche ourselves up and wonder whether Cath would defeat her hangover and make it to the greatest race in CUOC's calendar*.

Soon after our arrival (or just before, in the case of OUOC), hordes of alien orienteers were swarming out of their many minibuses and down the road towards the start. The air was silent with concentration and the grim gleam of determination flashed in every eye. Or was it a painful silence due to the fact that most of ShUOC had quaffed a little too much ale the night before?

I have to confess that I can't remember a great deal of the courses. This was partly due to an overdose of ibuprofen, and partly to the fact that I spent half the time lying on my stomach staring at the mud, after tripping (once again) up in a most undignified manner. Fortunately there was no drugs testing and (most of the time) no one around to be shocked by the insults I addressed to the treacherous grass.

What is certain is that the whole race was very exciting. Even I, completely bewildered by the whole sport of orienteering, found it nail-bitingly tense. The loops were well designed to be almost identical in length so that it was impossible to tell who was winning until they were coming in to finish. Sadly, some people snapped under the pressure of the occasion and we were witness to the shocking spectacle of a punch-up in the men's semi-final, as demand for the crossover control exceeded supply. Fortunately no one was (fatally) wounded and the control was only carried about 20 metres, before being flung aside by an enraged competitor. I hasten to add that no current (Has this anything to do with the mysterious ex-COC member that and article in TCS seemed to be so complimentary about?? [ed.]) CUOC members were involved in this disgraceful incident, which is maybe why none of us made it to the finals. These were dominated by LUOC and ShUOC and won by Murray Strain (EUOC) and Helen Palmer (LUOC) in the men's and women's categories respectively.

[Ready for the AlcO]The greatest challenge of the day was, of course, still to come. The Elite AlcO looms large on every alcoholic's calendar. It was here that CUOC came into its own with captain Alan demonstrating that he had been doing some training after all (even if it wasn't quite what Wayne had in mind when he told him to train before the KIMM). Sadly, not quite enough as he was pipped to the post by an impressive performance from Neil Northrop.

[Women's final]Once all the empty cans and discarded plastic beakers had been extracted from the mud, we hopped back into the death-trap to dash back to Cambridge so that the lads would have enough time to do their make-up before the curry. The evening's entertainment was a masterpiece of organisation on the part of Jenny, who deserves an award for her superhuman patience in the face of over 70 drunk and disorderly orienteers and nearly as many unclaimed chicken kormas. It must have been a good party as the details are very hazy in everyone's memory.

Finally, sincere thanks must be offered to Rosemary, and Jenny for all their hard work in planning and organising. And thanks to Wayne for his help when Jenny faced the superhuman task of finding a party venue at last minute when Chillies told her we couldn't have music in their upstairs room. Not only did we make a profit, but nearly everyone had a laugh as well. Commiserations to Ali (who twisted her ankle), Matt Crane (who bruised his ego when he failed to make the final), and me (who broke my foot).