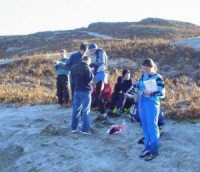 This year from December 7th-11th, England's Lake District was overrun by a hoard of bold, hungry students, eager to tromp through every inch of land and take in all the scenic hilltops, streams, crags, thickets, pits, depressions, stone walls, spurs, reentrants.... Well, let's just say it's fortunate that not too many of the area's residents noticed this invasion. That's right, CUOC members Blanka Sengerova, Alan Elder, Ann Marie Cody, Alison Ingleby, Ben Greenhalgh, Ed Ward, Marco Chiesa, Ian Elder, Mark Collis, as well as Anne Osborne from Oxford voyaged to the Lakes to celebrate the end of term and escape the monotony that is the Cambridge landscape.

The trip began with an uneventful, but rather long van ride up to the Lake District taking in a colour-coded race at Bosley Cloud on the way. While the weather was rather chilly and windy, the views from atop the heather-covered summit area were excellent...at least for those runners who became exasperated wading with through the heather and decided to take a break. Most of those who braved the Blue course agreed that it was an evil combination of brambles, underbrush, and steep hillside. This was worsened by the egregious misplacement of control 198 on a certain middle crag. Nevertheless, all managed to make it through alive (though in some cases this involved experienced people retiring!) while the rest of the members waited patiently by the MPV in the cold.

Upon arrival at the final destination of Coniston, the group settled in at Coniston Coppermines Youth Hostel. Our home away from home for four days, we had the run of the building and more bunk beds and board games (fishing, anyone?!) than we could handle. Each day dawned with a massive toast-with-nutella eating session in the kitchen. This was attended by all members, except Alan who was invariably off running up the Old Man of Coniston, since regular orienteering wasn't enough for his crippled ankle. Despite the notable lack of heat in the hostel, evenings were also delightful, with all the worn-out orienteerers chowing down on hearty pasta dinners, followed by relaxation in front of a roaring fire in the sitting room (Kudos to Ali for becoming "president" most often in a certain card game).

The first day of training was held at Loughrigg. Orienteers took in the spectacular hilltop scenery while attempting several helpful exercises, including a contour-following task. After having lunch atop a fine summit and being buzzed by numerous low-flying military planes, the final course was an all-out sprint down the frosty mountainside. More excitement was in store for the evening. Loz Colyer, a former CUOC member up in the Lake District, kindly arranged a nighttime canoeing adventure for everyone on Lake Windemere. Not to be outdone by the cold, we all donned enormous waterproof suits and eagerly secured pairs of canoes together with large logs. Upon receiving maps of the lake, two groups set off madly paddling in opposite directions to find several controls Loz had hidden on islands. The team of Alan, Ali, Ed, Ben, and Ian emerged victoriousâ€¦but only because they were chanting loudly the whole way.

Day two was a pleasant change from the cold, windy mountaintops of Loughrigg; the group found itself tackling several orienteering courses at the seaside locale of Haverigg Dunes. This terrain was particularly challenging, as most of the navigation involved detailed identification of odd-shaped dune formations with the contours. But a number of CUOC members distinguished themselves with brilliant and innovative orienteering technique. The first of these occurred during the opening exercise, which required traveling quite far down the dunes. But progress was halted by the presence of a locked fence, guarded by a group of mad farmers (?) in the process of berating their misbehaving dog. Ann Marie overcame this altogether strange situation by using her non-orienteering skills to persuading the folks to unlock the gate and give access to the second half of the course. Phewww...I hope I don't have to do that in a "real" orienteering match! During the final relay-team exercise, Anne Osborne demonstrated her masterful skills by managing to quickly find a control that her relay partner (who will go unnamed) had completely misplaced. Said partner was off relaxing on a comfy dune at that point. Rumor also has it that Ed Ward was so fast during his relay legs that he actually scaled the fence of the adjacent prison to have a chat with some inmates.

The third day began with some covert activity on the part of Ann Marie, who snuck out of the hostel before anyone else awoke and crept down the road to observe some sheep (yes, they do orienteering too!). But the real fun occurred at Bigland, a mostly forested terrain (with some more sheep...). Anne organised some fabulous exercises here, including a contour-following task and an old-smart-orienteerers-help-the-little-hopeless-ones game. All of the CUOC members got to hone their pit and crag-locating skills and improve their ability to use catching features. Particularly impressive were Blanka and Mark's skills in relocating themselves when their mischievous partner led them to an obscure corner of the map and had no idea where they were. Of course, it helped that Alan starting making whooping noises from the largest hilltop.

The final day of orienteering took place at Great Tower Wood - some hilly, forested terrain near a scout camp. I don't know about anyone else, but I failed to find a "great tower." Oh well. Courses were planned by Blanka, and everyone declared that her choice of approximately 10,000 meters' elevation change was downright cruel. But in the end, all benefited from the exercise and didn't seem too worse for the wear. The highlight of the day was running the same course twice, but with the start order reversed the second time around. Hence, the more experienced CUOC members had to try to catch the newbies, who started earlier. But some of the new people were too fast, and the older ones were stuck wading across some unappealing swamps...moo ha ha ha! At the end of the day, all the aching legs found themselves back in the van for the long ride back to Cambridge.

All in all, it was a fantastic trip. Special thanks go to Blanka for taking on most of the organisational drudgery!