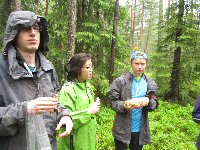 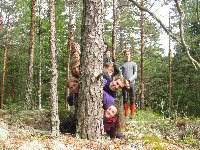 When we got up today it was raining, disproving Helen's claim that it doesn't rain in Norway. John had planned the morning's training on the eastern part of Mossemarka, which was generally easier running than previous days, but still technical terrain. Everyone was told to bring a map bag, but Helen and Rory forgot, so we had to use John's lunch bag and the kite bag as well. As it had been raining all night, the vegetation was very wet, so effort soaked from below as well as from above. John and Jeremy both saw elk, but they got away too fast to photograph.

By lunchtime it had started to brighten up, and we did the afternoon's exercise in the sun. This was based a bit further north, and consisted of a few loops planned by Jonathan. This area had a lot of marshes, which made running a good bit slower, and there were a lot of midges near the start, which made standing around a bit horrible. The orienteering was just as good though, with some tricky courses in both sessions.

When we were all finished, we went back to the hut and Paul and John figured out enough #Swedish to turn on the sauna. Most people took part in the sauna, but some didn't.

After that, we sat on the big rock outside the hut drinking tea from bowls and basking, while Rory prepared #carbonara

In the evening, we tried to get Netflix to work but couldn't, so everyone except Paul went for a walk while he wrote the report. They are yet to return, and are classified missing, presumed eaten.