Unlike the dark side, CUOC had a large turnout at the British Champs that took place near 'the beautiful village of Peaslake', south of London. CUOC even hired a minibus for this special occasion. Although only a few days before the weather was forecasted to be sunny with a few clouds, we were instead greeted by heavy showers that alternated with brief sunny intervals. Apparently one of the â€œbest orienteering areas in the countryâ€ it turned out to be a bit of an overestimation but it still provided some tough challenges, especially for those of us that are used to the flat plains surrounding Cambridge. At least the forest was nice and runnable. CUOC made its base right next to the run-in which unfortunately was also right next to the commentatorsâ€˜ speakers which assured that by the end of the afternoon we were all half deaf. The elite start was right at the assembly which was supposedly meant to provide entertainment in the form of commentating on every single elite runner standing in the corridor on the haystack. CUOC members did manage to make it more exciting by sending their elite runners out into the forest accompanied by Mexican waves. Thanks to this excellent moral support Matthew managed to finish in 14th place on the 17.0 km long M21E (Men 21 Elite). James Hoad finished in 30th place on the same course. The best CUOC woman was Carrie Beadle on W20E who finished just one place below the podium, closely followed by Katrin Harding a minute behind. 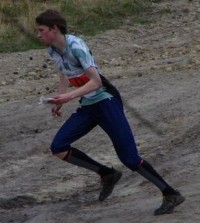 After a good barbecue supplemented by Wilfâ€™s Veggie Chilli, a viewing of a helicopter, and a sound nightâ€™s sleep at Matthewâ€™s auntâ€™s house, the following day was held at nearby forest Holmbury Hill. After a half-hour walk to the brashing-covered assembly area CUOC got prepared. Unfortunately due to two team members being injured, CUOCâ€™s presence was reduced to a single menâ€™s relay team. The terrain was tough, steep and uneven yet Matthew Vokes stormed round the course to bring the team back in fourth place, just a minute and seven seconds behind the leader. The rest of the team consisting of Tom Dobra and James Hoad couldnâ€™t quite match the international level pace set by Oxford and Sheffield universities (who ultimately got the top two podium spots), bringing the team back in 18th.