Today was a very wet day. It rained all day, and the tent was wet and the woods were wet and my trainers were definitely very wet. Paul says he likes that it being a wet day was mentioned twice, so weâ€™ll throw in a third one for good measure: it was a very wet day.

We were training in Bishopâ€™s Wood which is just south-east of where we live this week. It took a while to get there and Jonathan was on a mission to destroy his car, which made it take even longer and was rather disconcerting for the people inside the car, especially when he announced that it was a write-off anyway. There were lots of imaginatively named courses on offer, such as â€œBumpy Thingsâ€ which was indeed pretty bumpy. During the morning Paulâ€™s brain decided it had had enough of orienteering, so he followed people around all morning. There was also one course which went through some very opaque forest, for which we needed headtorches to see. It was basically night time.

Johnâ€™s bike decided to make a bid for freedom at some point in the morning, which resulted in John getting very, very hot and then very, very cold very quickly, especially because Jezza and Paul couldnâ€™t make up their minds on the temperature. It seemed it was a day for attempted escapades because the tent also made its bid for freedom whilst its captors were trying to dismantle it later on in the day. Unfortunately for the tent it was unsuccessful. Maybe itâ€™s not that surprising though, since there was an angry man shooting and we nearly all got shot, so I think the bike had the right idea. Pippa also got scared by a bird. There was also the odd sighting of a very large deer, or was it an OUOCer in disguise? And it rained all day. 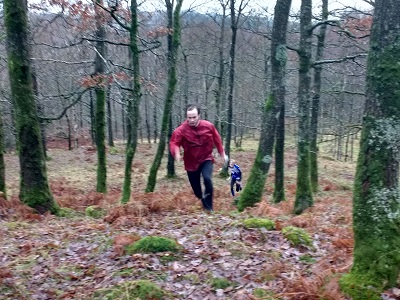 The afternoon was a downhill sprint, during which everyone ran far too fast down very steep, slippery hills. But it was a lot of fun, so it was worth it. Back at the place where we live this week, Helen was still refusing to wear the Dan Hat, but eventually relented. Matthew was also very proud of his spice collection. There was a deepening feud over the addition of milk to tea, whether it should be there at all, or whether it should go in the tea before or after the tea itself. Suffice to say that Jezza and Lindsay were clearly right. There was also much discussion over the possible uses of Groovy bars, including if anyone would notice if we melted one into tonightâ€™s curry. In the end that didnâ€™t happen, but John and Paul did build a Christmas tree with them which I suppose is an equally as pointless thing to do. The actual Christmas tree was once again loaded with kites as baubles, and Drongo retreated into its branches as he doesnâ€™t approve.

Later in the evening, Dave arrived just in time for dinner, which was chicken curry followed by brownies, and then there was much debate over which games should be played.

Now hereâ€™s a poem as I canâ€™t think of a suitable way to end this, and poetry does seem to be a theme this week:

A group of orienteers were out in the Lakes,

Training in grassland, mountains and wood,

For a week which in theory would be very good,

Or may prove to be just a major mistake.

For a group of young adults they did claim to be,

But in fact they were more like baboons just set loose,

They claimed to be brainy but were silly and crude,

From jokes inappropriate to pranks and deceit.

From Matthewâ€™s car keys to Johnâ€™s bike of race (ing),

Much went a-missing into the trees,

Hiding in bracken and puddles quite deep,

Leading them on a merry goose chase (ing?).

All jokes aside they were quite organised,

Though they did leave the tent and had to go back,

Oh and the first day they had knives taped to bags,

Since someone forgot to remember the kites.

Their cooking could also have been improved,

They did have a habit of burning the pans,

So hours of fun were of course to be had,

By pan-scrubbing Paul getting into the groove.

Talking of groove the star of the week,

Was the favourite treat, those fab groovy bars,

But not just for snacking they could also be art,

In true Christmas form laid out as a tree.

But the best stars of all were at Sinterklaas,

Posing and pouting each in a dress,

From Ben and Jezza we expect nothing less,

Strutting their stuff from bust down to arse.