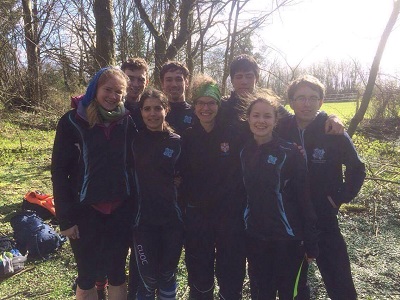 After a 7am start on Saturday, the team made it to the race to discover that for some reason Andy had not been entered, but fortunately everyone else had. After attempting some negotiation, Andy decided that it was easiest to just take Pavel's map after he had finished and go a run anyway. The rest of the team had mixed results, as both Jeremy and James managed to mispunch, but everyone else had good runs. Pippa beat Helen by 25 seconds to come 6th in the Women's A, with Helen finishing 8th. Lily also ran well in her first major competition to finish 48th. In the Men's A competition, Paul put in a strong performance to come 15th, and Pavel would have come 32nd if he was actually a student! 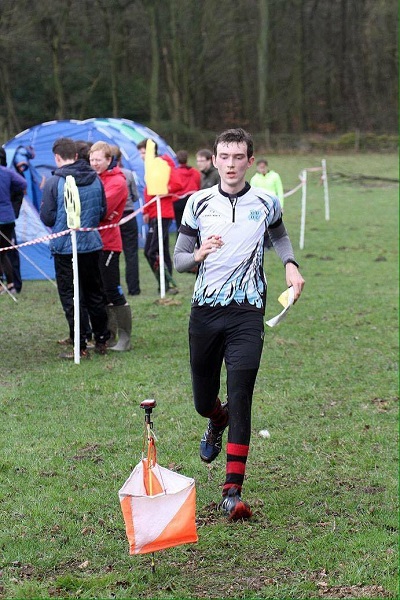 Racing done for the day, the team headed to James' friend Ellen's house to pass the time before the sports hall was open and we could shower. Fortunately Ellen's mum provided us with plenty of tea, hot chocolate and biscuits to keep us going, as well as lots of interesting conversation ranging from what exactly orienteering is to how many songs about potatoes we could name. The team then headed to the sports hall to shower and get ready, before heading to the all you can eat Chinese buffet dressed as various characters from Shrek. Unfortunately none of us managed to eat 7 plates of food (which according to Pippa, who watched a documentary about it, is the amount you need to eat to make your money back at an all-you-can-eat buffet), but sufficient quanties were consumed to make sure no-one wanted to see Chinese food again that evening. The social continued to the Sheffield student union bar, where there was much negotiation with Oxford over teams for the boat race. Unfortunately, despite being given Helen in a possible sabotage attempt, OUOC managed a victory over CUOC, so there's still work to be done before Varsity next weekend. After this, some people progressed to PopTarts, the SU club, and other people gradually left to go to bed, until around 3am when Pippa realised that there were no orienteers left apart from her, and decided to it might be time to leave.

After a few hours sleep (3.5 - 8 hours depending on how sociable you were), the CUOCers left the sports hall at 7:30am to head to the relays which started at 9am. On arriving at the forest, they weren't really looking forward to running, as the terrain seemed to be either shoe eating mud on the paths, or waist high brambles off the paths. However, the courses were sensibly planned to avoid the worst of the brambles, and were actually quite tricky in places, as almost every control was hidden in the bottom of a pit. The Men's team started first, with Paul coming back on first leg in 5th and then James and Jeremy running the team home. The Women's teams started second, with Pippa and Helen both running solidly on the first two legs. Lily was unable to hold off multiple World Champs GB orienteer Tessa Strain from Edinburgh Uni on last leg, but brought the team back in strongly. Pavel and Andy also enjoyed their runs as part of an AdHoc team with someone from Aberdeen.

After a great weekend of racing in Sheffield, and with some excellent results achieved, everyone headed back to Cambridge, with some people preparing to head off to Varisty in France on Monday.