Liam was accidentally healthy by choosing a packet of crisps that only had 3 actual crisps in it.

Jezza was injured so decided to cover the most distance out of all of us by cycling to training using Johnâ€™s bike, a total of 38km. Letâ€™s just say he got a very damaged undercarriageâ€¦ 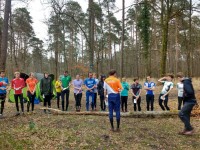 We did a peg relay planned by Jonathan, whose attempts to french ended up in calling it a â€˜Relais de chevilleâ€™ or â€˜ankle relayâ€™. Unfortunately, Paul did not like this relay, since he prefers relays of the temporal, time-keeping variety, especially with lots of waiting around. So he, Ben and Phil felled a tree.

This relay had a slight twist, with pegs hidden up a tree, on the tent and in a pile of horse dung.

Rory Burford orienteered, and was rather good at it if I say so myself.

After having arrived from a hard dayâ€™s orienteering, we were treated with pizza!

Rowan arrived from his Big Birthday Adventure in Paris.