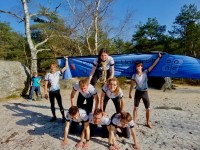 Today was the day of the actual Varsity Match and time to put into practice all of our training.

The courses were technically challenging with many controls on boulders which were surrounded by other boulders making them difficult to find. Every member of CUOC managed to complete their course and special congratulations go to Liam for his perseverance and not giving up even though it took him 4 hours to finish and Jasmine who completed the women's A course despite initially signing up to do the B course. Unfortunately we didn't beat Oxford in either the men's or the women's competition but DRONGO won both competitions in the alumni match. The results were the same in the boat race although CUOC should have won due to the large amount of OUOC spillage which was ignored.

It was a lovely sunny day so while waiting for everyone to finish some DRONGOers showed off their dance moves and limbo skills. Despite being injured, Rory is still capable of doing the worm. Team photos were taken and it turns out that DRONGO can manage to form a 10 person pyramid whereas CUOC failed at a 6 person one. 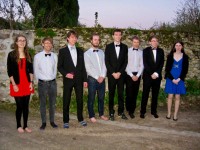 We ate the varsity meal far too early according to the French organisers but in true British form everyone was in sort of black tie. I suspect there will be quite a few sore heads tomorrow morning for the relays after sampling the local wine.