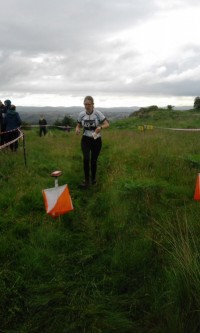 Last weekend was the annual Harvester Relay held in Blakeholme, and this year it was organised by DRONGO.

On Friday afternoon, Ben W, Ben S, Jeremy, Zuzka, Pippa, Richard and Lily all travelled from Cambridge to Lancaster to stay at Helen and Johnâ€™s house for the night. The 10 hours of sleep we had was much appreciated as we knew we werenâ€™t going to get a lot on Saturday night.

After breakfast on Saturday, we drove to The Crown pub where we met up with Matthew, Mark, Hanne and Brian (the on the day controller) and had a nice lunch to fuel us for the long day ahead.

As soon as we got to the camp site the preparations for the night ahead began. Matthew went out straight away to hang controls, and the rest of us helped to mark routes from the car park and from the drop off points to assembly. We also had to carry all of the equipment from the camp site to the assembly point (about 500m away up a steep hill) and I have to give a special mention to Ben W, Mark and Jeremy for carrying the generator up between them - by no means an easy task!

Before long, other teams began arriving and the O-Nosh van started to serve food. Jonathan and Fiona soon arrived which completed our CUOC team.

The relays themselves began at midnight with the A teams running first. This included the squaDRON GOld team with John running the first leg. At 1.30 the B teams started. Helen was the first leg for team CUOCh Ness Monster and had a great race and she arrived back in 3rd place! Pippa was also on the first leg for her SYO team and ran well, although she said she made a few mistakes. The course was made interesting with a herd of cows in one area but apparently they were easy to avoid as they were easily seen with their very reflective eyes.

Jeremy was second leg for CUOC and arguably had the toughest course for the B team as he had the long night leg. Unfortunately, due to the difficult courses and terrain, and a few mistakes made, Jeremy was a lot longer than he thought he was going to be and retired. However, he made such a great effort! Lily then took over to run third leg which according to Matthew was a hard orange course. She was pleased with her run because it was the first time that she hasnâ€™t got lost at an orienteering race!

By this point, the sun had risen and headtorches were no longer needed which made the courses slightly easier. Fiona took over for fourth leg and had a great race, running really well. As she was out on her course, Jonathan took part in a mini mass start and finished strongly in 5th position for his leg.

Although CUOCh Ness Monster was not the fastest team, it didnâ€™t matter because we were a non-competitive team so were not eligible for prizes anyway, but nevertheless we all had so much fun.

As soon as the last few people had finished their legs, the prize giving took place. We then began to pack up after a long but exciting night. After eating a very delicious cake baked by Matthew (which I understand contained 450g of white chocolate), we journeyed home on our separate ways. The team travelling back to Cambridge dropped Jeremy off at his house and his Mum had kindly made us all a roast dinner. Vegetables had never tasted so good as we had been snacking on sugar for the past 24 hours. We also had some rhubarb crumble and bakewell tart which were so delicious. A perfect ending to a great weekend.

I just want to say a massive thank you to DRONGO and everyone else involved in organising the Harvester this year, particularly Ben W, Matthew, Ben S and John, and Derek and Brian the controllers. I think it is clear from all of the comments people have made how much of a success it was from the planning to the courses to the biscuit buying - we all had a lot of fun and now canâ€™t wait for the next one!