The Fifth Cambridge City Race, an urban course around the streets of Cambridge, took place on the 28th October 2017. The race itself was open not only to CUOC members and Cambridge students but to the general public, which led to over 200 people participating! The courses themselves varied in length, ranging from 1.7km for the juniors to 7.2km for the Menâ€™s Open. A full list of the available courses can be found here. 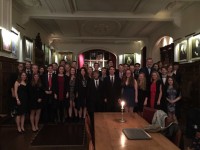 Finally, a huge thank you to the planner Paul PruÅ¾ina, organiser Jonathan Mortlock and controller Simon Errington, without whom the City Race would not have gone as successfully â€“ many thanks also to everyone who took part, hope you come back next time!