Today was way better than yesterday. We were peacefully woken by the dulcet tones of Nicola Manfredi. Copious quantities of porridge were both made and eaten, although the chocolate spread didnâ€™t quite meet Helenâ€™s exacting standards, and thus she had a disappointing breakfast.

The hangers left the bunkhouse at 0900, and after some inventive routechoice involving crossing the Britannia Bridge three times, arrived through the mist at Plas y Brenin. They headed up through the skog to the bog, and set out onto the hill of Braich Bryn Engan. Paul, James and Rory all placed their controls correctly, while Helen placed her controls incorrectly. When the others arrived, Harrison proved that Oxf*rd arenâ€™t that useless after all by fixing the placement of Helenâ€™s flags.

James had planned the morning; some of the courses were short, some were medium and some were long. Some had lots of colours on the map, and some only had two. Some were very hilly, including one killer leg with 125m of climb, which Harrison and Paul strongly disapproved of. All were very wet.

After a while we stopped for lunch. Because Helen O was neglecting her duties as womenâ€™s captain by not being here, we finished in record time of 40 minutes, and moved on to a â€˜migrating controlsâ€™ exercise planned by Paul, which was a score course, except not all the controls were there all the time. Paul was overconfident of his running speed though, so was late to some of the controls to be removed/replaced, so it didnâ€™t work perfectly.

After that had finished, we headed back down the hill, stopping in the forest to kill several trees, then select one to take home and decorate. At the bottom we noticed that Plas y Brenin Outdoor Centre has a ski slope sponsored by British Orienteering; CUOC recommends that British Orienteering money should be used on Orienteering rather than skiing, and believes that this may be a solution to its funding woes.

We arrived back at the hut and got all clean and nice. Paul started mapping the bunkhouse for MicrO, while the less cultured members of the group enjoyed a game of Bratz Top Trumps. We were fascinated to discover that Cloe [sic] is known as Angel because whatever she wears, she makes it look divine. However, when she changes to her â€˜Wintertime Wonderlandâ€™ outfit, her Fashion Passion decreases by 11, but this must be taken in context: her street style increases by 61. 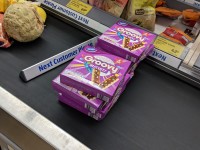 Before anyoneâ€™s IQ could be decreased too much by the game, Rory returned with Jeremy and John, which made everyone exceptionally happy. John brought 59 groovy bars, which improved the mood even more. Jezza was immediately awarded the Dan of the Day hat for missing his second train, and we had dinner, which was scrambled eggs on spaghetti, a creative interpretation of carbonara.

During pudding, which was apple crumble, we began organising the first annual Path or Crag Varsity Match. A running score will be added at the end of each report this week. Cambridge have taken an early lead, but with 22 days still to go it is very much all to play for!