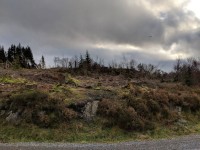 After yesterday's overindulgence at Newborough, today we atoned for our sins in some of the filthiest skog we had ever tasted: Llyn Elsi.

After some confusion about where we were allowed to park, the hangers made it to the reservoir and ventured off towards the start. As we crested the first hill, a magnificent vista unfolded before our eyes: a vast open landscape of rocky hills, poking their summits above a beige sea of brashings and fallen trees. Consulting the map, we were dismayed to find that it was supposed to be white forest, where several controls should be hung.

Unperturbed, we journeyed on towards the start, through a valley that could almost be described as Swedish, before heading off into the forest to attempt to hang.

Only too soon did the hangers return to discuss their miseries. Approximately half the flags had to be brought back after the terrain proved too disgusting to enter. We quickly set about some replanning, and put them back out in spots slightly less inaccessible.

Everyone else arrived and set out on some newly designed courses planned by Harrison. Fiona generously described the terrain as 'not all shite', and we stopped for lunch quite soon. Collectors were sent out, and serenaded over the radio with This is Wales by The Barry Horns, feat. Paul and Aidan.

We moved on to the afternoon session, funicular trains planned by Rory, while Fiona and Paul found a triple Path or Crag problem.

Eventually, permanently scarred, we all emerged from the forest and headed home for the night. John was dropped off at the station, and our Czech contingent headed to the pub. The kitchen team made some pot pies, and Lily produced some very good sticky toffee pud. Harrison was awarded the Dan of the Day hat for thinking it might be a good idea to remove the green from the map. It was not.