Today, some people rested, some walked and some ran:

On our rest day, Helen, Rory, Rowan, Jeremy and Jonathan decided to avoid the worst of the others (and the weather) by staying close to the bunkhouse. A short drive led them to a nearby 'beach' which was becoming distinctly less in abundance of beach. After cleverly trapping 'Midge' the overexcited doghouse, a decent walk along the coastline gave ample exercise and entertainment. Jonathan and Jeremy skimmed some stones, sometimes on water.

When they returned a ship was spotted floating worryingly high, almost surpassing the elevating of Rory's car. A swift boarding of the SS CUOC ensued in a Dunkirk-esque manner, before they had to make a Day-After-Tomorrow-esque evasive from the unstoppable, unrelenting, merciless tide.

After that narrow escape, they went shopping on hard mode (because Rory had prepared a long shopping list, which the bunkhouse had retained.) 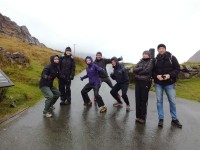 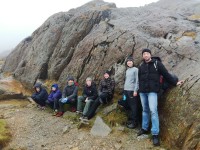 Dan drove some of us to Pen-y-Pass, which was very scenic. We then climbed into the cloud surrounding Snowdon, which was not. Later these clouds cleared (briefly) to reveal a solo dabber standing by the lake below us-possibly a clever strategy for warming up his hands (none of us tried it to find out). We traversed a pathandcrag. At the finger post, some of us turned back whilst the rest of us trekked on through the snow; staying in loving contact via walkie talkies which occasionally reached the fast runners on the otherside of Snowdon. We think even the big computer in the Met office underestimated the 110km/h winds at the summit. Here, utterly alone, we took a brief musical interlude to remind ourselves of our current location (Waaa-les, nice one).

Our views on the view: it was 'as white as Helen rapping' and 'as blowy as a Dyson handrier' (like the one we made use of back in the car park toilets).

Meanwhile, some fastish people were making a summit attempt from the other side. Starting from Llanberis, we followed the road up by the railway tracks, commenting on how unnecessary it was to have a train to the top.

After a couple of hundred metres of ascent, the tarred road gave way to gravel, which quickly progressed to stone slabs - not ideal terrain for Paul's dobs, but fine for Aidan's slick trainers. Harrison, having been awarded the Dan hat yesterday, made a point of attempting to wear it all the way up, but had to give up early after an especially gusty gust gusted it away. Soon retrieved, it was carried shamefully the rest of the way. As the air grew thinner, the strength of the wind intensified, and we found ourselves getting blown up the hill at quite a pace. Sadly, it was not to last, and all to soon the fickle weather gods changed their mind and tried to blow us off the mountain.

In a moment of inspiration, we took a leaf out of the book of speed skating, and adopted the crouched over, arms-behind-backs position of least frontal surface area, helping us speed towards the top in record breaking time of 75 minutes (although Aidan thought it was 45).

At the summit itself, we stopped for some pictures, Harry lost the Dan hat, Harry found the Dan hat and we didn't go to the cafÃ©, before turning around to get propelled down the slope by Storm Caroline.

A hairy descent ensued, with several near-death experiences, including Harrison falling over, Aidan cowering behind a rock, and Paul being blown 5m until he encountered some suitably grippy ground.

Eventually we reached the bottom and the 'best cafÃ© in North Wales' and drank some hot chocolate, which was nice. We drove back listening to The Fox, and rejoined the resting group.

In the afternoon, everyone felt quite lazy, so stayed in the hut, drank tea, ate biscuits, played cards and chopped veg. Paul encouraged everyone to eat cloves. We were not fans.

As the afternoon progressed on we exhausted the supply of modern Christmas music, then Christmas carols, then modern music again. Dinner was prepared, and Jeremy made a massive mince pie out of marmite.

Finally, Ben arrived and dinner early ready. A veritable feast of turkey, ham, nut roast and copious quantities of miriad varieties of vegetables was laid out across the tables, and accompanied by Paul's homemade wine, as well some more traditional beverages. It was unanimously declared to be 'quite nice'.

When everyone was full, pudding was brought out. We serenaded the Christmas pudding multiple times, as Jezza was having trouble lighting it, and then, when finally aflame, it continued to burn for a good couple of minutes. Sadly, one of the mince pies was slightly over-caremalised, but there was still plenty to get round.

The traditional CUOC Sinterklaas took place after Christmas Dinner. Many truly wonderful poems had been written - we had several ballads, one mock-up of 'Jabberwocky', and a beautifully discordant clerihew. Also keeping with the tradition, several dresses were gifted to men, and everyone's Fashion Passion level increases by at least ten.

Sadly, all good things must come to an end, so we went to bed.