This weekend a small contingent containing CUOC captains headed to Wales for the British NIght Champs, along with DRONGOs Ben, Zuzka and Dan. We left straight after circuits on Friday night, which annoyed Helen, because it meant she had to go to circuits. On the journey, Dan told us some stories, which kept us entertained/bored all the way to Ben's parents' house, where we were staying tonight. We had some dinner, including vegan cheese which was weird but very nice. There was a piano, which Paul played too fast, then Ben played at a sensible speed before we went to bed.

In the morning we got up and continued on our journey in a leisurely manner. Dan told us some more stories, which were interesting/tedious, and made the drive fly by/drag on for ever. Eventually we made it to Abergavenny, where we stopped for Zuzka to get some frozen mango, and we went for a walk up a local mountain called Sugarloaf. It was very cold and windy, but also very sunny, so when we made it to the top we were able to shelter just of the summit and sunbathe while we ate our lunch, which was quite groovy. Ben insisted that we take the cold way down, so the descent was done in multiple stages, interrupted by breaks when we lay down in the heather to get out of the wind. 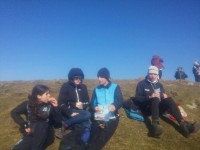 When we got back, we ate cake, cut with a ruler because no one had a knife, then continued on our quest. Dan told us even more stories, which were captivating/mind numbing, and finally we arrived at the ewent centre at Merthyr Mawr. We stayed in the car for a while because it was cold, but eventually got out when it was time to run.

The area was quite interesting - open sand dunes, with some small bits of woodland, and a bigger bit of forest near the end. Ben ran quite well, coming 4th on M21, and Helen ran quite better, coming 3rd on W21. We had veggie chilli for dinner, then headed to the Travelodge where we were staying. This time Dan didn't tell very many stories, which a great disappointment/relief. We had booked a room for three, so when we arrived we went inside in two waves to trick the receptionist. Ben and Zuzka sacrified themselves by squishing into a single bed, which meant the rest of us were quite comfortable. 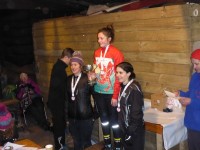 In the morning we got up and had breakfast before heading to Pembrey for Sunday's race. Dan was well rested, so had plenty of energy to tell funny/interminable stories during the drive. Today's area was a bit like yesterday's, except most of it was covered in horrible green stuff, so there was a lot of dead running to join up the nice bits of yellow and white. Paul wore the propellor hat during the race, which Helen thought was stupid. It turned out to be slightly stupid when it fell off and he lost a couple of seconds going back to pick it up, but luckily those couple of seconds didn't affect his position in the race.

Once we were all done, we went to the beach for some more cake. Paul had confirmed that the sea was cold during a warm down, so we didn't go for a swim. Eventually we had to go so that Helen would be back in time for a mad night out, and started the drive back. Dan told us the same stories again, which was exciting/monotonous, but finally we made it back to Ben's parents', for some more dinner, before the final leg. Sadly/thankfully Dan was now tired enough to stop telling stories, and we made it back to Cambridge, where Helen was only an hour and a bit late for her friend's 21st.