This week the ground was too white for normal training to go ahead, so Ben planned an alternative snOw training on Jesus Green, where we would build contours in the snow, and do a micrO course around them. Sadly, the ground wasn't quite white enough for this, so we just threw snow at eachother instead. Ben drew a course in the snow which featured such obstacles as a table tennis table and the treacherously icey skate park. Sadly, after a proper risk assessment was carried out, it turned out that running over ice was too dangerous to allow a competitive ewent, so results have been voided; however as the controls had been put out people were permitted to run at their own risk. 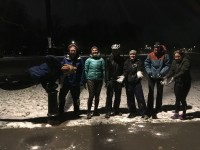 We then went and had pizza, where for once we had bought fewer pizzas than the algorithm suggests. Luckily, we weren't as hungry because we hadn't run very far, so everyone ended up full anyway.