Today the middle distance race was held at Brereton Spurs, in Cannock Chase. The area was mixed, runnable spur-gully terrain where you had to keep concentrating while running fast, making for some excellent middle courses. Even though the forecast was for it to rain all day, it didn't rain at all, which made it even nicer. After the race, some people tried out Biathlon-Orienteering, which is based on the ski-biathlon format, alternating between running orienteering loops and target shooting, which was quite fun, and it would be nice to see more of it in the UK.

CUOC continued to have some successful results, especially in the junior elite courses: 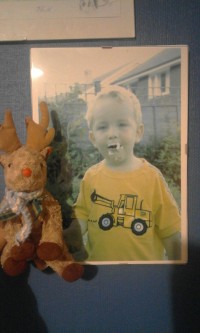 After the race, all the fun CUOCers went back to the DRONGO bunkhouse for some tea and biscuits, and then to a pub for dinner. Helen was elected 4th most boring CUOC captain ever, when she decided to go to a different pub with her parents instead. Lily and Ana revealed that Jeremy used to have a digger on his chest, however, due to modesty, he refrained from showing it to us.

Tomorrow's race is a long distance, with the senior men running almost 18k, and the women 11.5k. Tune in tomorrow night to find out if our intrepid reporter survives or perishes out in the skog