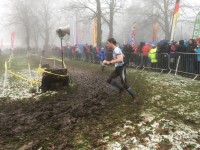 Today was the JK relays, at Beaudesert again. When we woke up, the ground was unusually white, which made everyone very worried. Luckily, the strange white stuff soon transformed into a more familiar brown sludge, and balance was restored to the universe. Due to the amount of wetness around, a lot of people stayed inside the DRONGO bunkhouse for as long as possible, leaving Aidan to fix the tents on his own, which had collapsed under the weight of snow overnight.

CUOC had one team entered in each of the Men's and Women's Trophy races, with Aidan, Jeremy and Paul coming 15th in the Men's, and Elizabeth, Ana and Lily being disqualified from the Women's for being just too fast. Helen, Pippa, Fiona, James and Euan all ran for their home clubs instead, in a betrayal rivalling that of Anakin Skywalker.

The terrain was the same as yesterday's, and one of the controls was even the same as number 34 from the M21E. It was still quite interesting though, with the courses being quite well planned. The main difference from yesterday is that everything was wetter, so it was quite slippy, and in some areas the map will need to be updated with all the new erosion gullies. 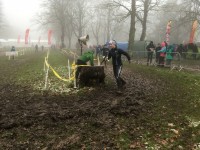 At the end, everyone went home, except for Aidan, who went to Majorca. Hopefully it's less snowy there for him. Well done to everyone who competed over the weekend (even those running for their home clubs), and have a good couple more weeks of holiday before the start of term!