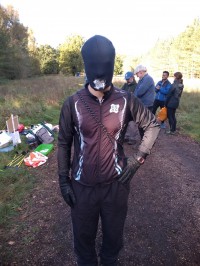 There was decent turn out of CUOCers for the first WAOC race of the term, which was held at High Ash. The race was billed with some excitement by WAOC as no-one had run there in over 10 years so it had to be a good area; this translated into cautious optimism from CUOC. Before we were allowed out into the highly anticipated luscious forest we had agreed to help WAOC out with the running of the event, with some people landing cushy jobs in sunny tents with chairs, and others banished to the start in a cold and shady bit of wood. Lily wasn't running but had agreed to drive us there and instead had a great time spending four hours on download and chatting to anyone who came past. 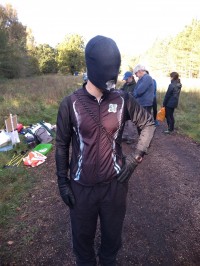 Once everyone got into the forest it was revealed to be a fairly standard Thetford style area, with lots of flat brambly woodland, and occasional speedier sections. However, even this was clearly too technical for the Captain, who was running at such a high speed that he managed to miss the road crossing control on the return visit, resulting in a mispunch. (Let's hope that embarrassment about this wasn't the reason he wasn't at training at Homerton the following week). Fortunately there were better results from the rest of the CUOCers, particularly from Niki and Larry in their first races since joining.

Thanks to everyone from WAOC for putting on an enjoyable race, and hopefully we'll continue to see such good attendance at races later in the term.