Morning dawned dark and early and CUOC awoke, some to generic alarm tones, some to Nicola Manfredi's hit classic 'You and Me', and others to Paul's pan lid solo, critically acclaimed as 'unnecessary' ( - Ben Windsor, DRONGO correspondent). Porridge was eaten, lunch was made and the hangers set out for the long drive to the training area. On the way there they encountered some roadworks, with a big red sign promising a 15 minute wait. Luckily, there was only a 7 minute wait, but this was still a very long time, which made them sad. 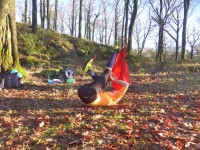 Today's area was Great Tower, which was pretty great. Offering beautiful runnable forest, with mostly not too steep slopes and a wealth of contour details, the 1998 World Cup Short area was enjoyed by all. Paul had planned some delightful courses, including a 1.3k corridor following a single contour, a downhill course from the very top to the very bottom of the area, and Course 3. There was some trepidation regarding if any of our brand new Hairy converts would ever return, and Hamilton had us worried for a short while, finding it 'disorientating, fun and confusing' Iain found it 'slightly less disorientating', so clearly shows promise as a future Big Name.

We stopped for lunch, when Aidan produced a frisbee, which was surprisingly good considering came free with the Fresher's Fair. Helen didn't insist on a one hour lunch break, but the weather was so nice that we managed to have one anyway!

Afterwards, the 'fun' activity remained, but we were soon to discover that disaster had struck. An enemy had infiltrated our planning process, with Oxford's Tim providing a clock relay, widely regarded as a terrible training format, as his contribution. Luckily, Aidan had noticed in time, and ensured he didn't come on training tour after all, citing 'taking a break after Varsity' as his reason. After some discussion, we decided to go ahead with it, and it turned out to be 'rotational and exhilarating', providing good first leg training under pressure. However, CUOC still recommends that clock relays are not suitable for the winter, because they normally involve too much coldness.

Once we were done, we headed back down to the car, where being the responsible orienteers we are, we washed our shoes to prevent transfer of Phytophthora. However, Iain washed his shoes slightly too enthusiastically and misplaced one of them three metres down a narrow pipe, earning him the coveted title of DRONGO of the day. Hopefully John can supply some spares for tomorrow.

After deciding that was a lost cause, we headed back home for tea and tea. Matthew arrived, providing groovy bars, and finally bringing balance to the world