Today was Tour Champs Day, so Aidan got up early to bring Rob to the station before going to hang the controls, while everyone else tidied the bunkhouse and dealt out all the remaining food. Eventually it was time to go so cars were loaded up and we headed over to High Rigg. The astute reader may notice that all of the previous areas have been over an hour's drive away from Hawse End, but today it was only about 20 minutes, on the only day that we didn't have to go back to the bunkhouse afterwards. There is of course an excellent reason for this, which can be discovered by calling CUOC Customer Care on 0044[Aidan's phone number].

By the time everyone else arrived Aidan had almost hung all the controls, so first start time was set for 1115, with 3 minute intervals to try to avoid trains. Everyone set off onto the fell, which was exceptionally citric terrain - dryish, quite rocky in places and not too steep in places. The course was well planned with a mixture of short legs and one quite long one offering route choice around some crags. 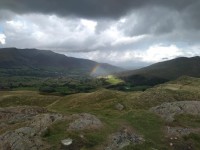 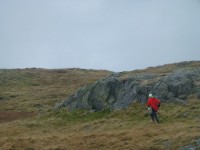 Ben was the fastest around, but sadly was disqualified for overtaking Jeremy without saying 'choo choo', leaving Paul and James in the top two spots. Helen was fastest female. Rowan was last back in a time of early enough that we didn't get bored waiting for him, and even collected all the controls!

Full results are below, sorted by whatever weird order Aidan decided to sort them by:

Soon enough it was time for everyone to go home. Aidan was presented with a lovely Christmas card, featuring a 5 foot cast iron stag shimmering in the moonlight, before leaving with the DRONGO hat, resulting in him being retroactively awarded DRONGO of the week. Well done to everyone who came along for all or part of it, and have a groovy Christmas.