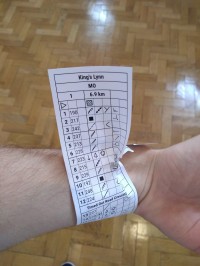 This Sunday CUOC decided the optimum orienteering race was the King's Lynn Urban, as opposed to any other races that may be being held in the Lakes. While everyone else was busy revising in many libraries, the dissertation crew of Rowan, Jeremy and Fiona LB decided that their write ups were going sufficiently badly that a morning out in King's Lynn was a good idea to relieve their distress and boredom. A few DRONGOs who hadn't made the trip to the Lakes were also spotted scuttling around the city.

Jeremy and Rowan arrived disappointingly early at Cambridge Station, so didn't have to run to catch their train and instead had a 5 minute wait. They were then once again amazed by the anti-mountainousness of the Fens, before arriving at the event centre early, another first for Jeremy. Jeremy then realised he'd forgotten his control description holder, which was definitely not a first, but thankfully learnt how to create an excellent improvised holder from Rowan.

On the Men's Open, Jeremy was first starter with Rowan just 2 minutes behind. This gap continued to remain at approximately 2 minutes for the remaining 10km of the course, with both taking the relative lead at different points, before Rowan put in a strong final kilometer to win the grudge match by 16 seconds, and giving Rowan 6th and Jeremy 7th. Meanwhile Fiona put in an excellent performance, winning the Womenâ€™s Open, ahead of DRONGO Miranda in 3rd! 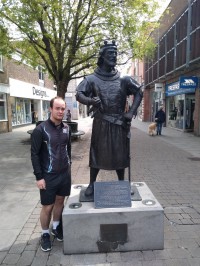 The courses were reasonably well planned, making the most of some interesting alley way systems, although involved too many dog legs for Jeremy's liking, as it meant running back past Rowan. There was also a novel control on a ship's anchor, for which nobody recognised the control description.

It was a very muggy and warmish day, so Jeremy and Rowan were very pleased to hear that the finish was close to The Wash. Unfortunately there was insufficient time to investigate it before Rowan and Jeremy had to leave to catch their train back to their misery.

On the walk back to the station Rowan found a statue of another notorious John, King John. As a proud Nottingham Outlaw, Rowan took offence at a grumpy John being displayed so prominently, but despite taunts and threatening to play Helen's playlist of musicals, the statue seemingly ignored Rowan, so instead Rowan settled for a mocking photo.