As a new day dawned at the Saint Madoc Centre, orienteers roused themselves excitedly for what was to be a truly momentous day. A day, the like of which has not been seen in living memory. A day where we only started training in the afternoon.

For all of us, that is, except for Mr Bigby, who in accordance to his strictly laid out ten year plan, had greater things on his mind. In preparation for this highly prestigious Poultry Run on Sunday, after breakfast he dutifully bashed out 2000m hard followed by 4*400m on the roads. Upon his glorious return, he made the first of many complaints about how far he was going to have run today. In awe of this commitment to the Plan, everyone else told him to stop whining. In the meantime, the more normal* members of the party spent the morning being boring, chopping vegetables, and, in the case of Oxford Imposter 2, sleeping. The only other interesting thing that happened was when James yeeted a packet of biscuits at Paul's head, which was generally viewed as not ideal.

After we'd had lunch at an unreasonably early hour, the hangers left to do some hanging. However, they had made it barely 200m from the bunkhouse before disaster struck, and they were confronted by a Wide Load in a Not Particularly Wide Lane. The load in question was a slightly dynamic caravan on a flat-bed lorry raising it about the height of a car above the road. A person more enthusiastic about the expedited hanging of kites might have driven underneath, but instead, the Oxford-dominated hanging crew showed lacklustre commitment to the cause and elected to wait it out.

A short while later, the rest of the gang left, beginning the most exciting race of the afternoon, between Tom and Aidan driving, and Jeremy, Paul, Heather and Joe running to Broughton Burrows. In a matter of minutes, it was all over, with the driving team arriving only to find to their dismay that Team Low Emissions was already playing on the swings. Once TLE had collected their bags from the car, we walked over to the start and met the hanging team.

The training consisted of three lovely courses across some very lovely contours covered in some very loathely marram grass. Ryan described it (rather boringly) as great fun, while James said that it Broughton brought on a lot of confusion. When everyone had drunk their fill of tasty sand dunes, we collected controls and walked over to the Trampoline Depression which James had first encountered while very very very very lost at the SHIs. Much time had been spent trying to work out where it might be, with a detailed search of Google Earth eventually coming up trumps and showing a black circle near the north east edge of the area. On the way, we met a large steep dune, which some people ran fast down, before arriving at the fabled site. As we crested the hill above the mighty hole, we saw to our horror that some legs were missing, rending the trampoline not particularly structurally sound. Luckily, Jeremy had recently mastered Engineering and was able to test it out and determine that it was safe enough to jump on for a bit. Other resident risk takers Paul and Aidan also partook of the bounciness, but everyone else voted for the strong and stable option of staying on the ground.

By this time it was almost dark enough, so we headed back to the cars to dump bags and get ready for NightO. There were some nice trains exercises planned, which set out on in groups of three. Aidan decided that members of the Fast Group should be named after famous trains, proclaiming himself to be the Mallard, and anointing Paul as the Flying Scotsman, 'because James isn't'. Devastated, our captain had to settle for the Caledonian Sleeper. The actual training was 'dark', 'fun' and 'exciting', and afterwards we went home to finish making dinner. Once back at the bunkhouse, Aidan complained once again about his daily mileage before having a shower he had been looking forward to all day, after being cruelly pressured into not having one after his first training. 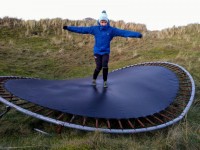 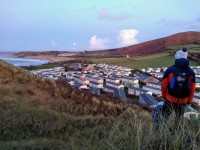 Dinner tonight was veggie chilli, followed by some chocolately pear thing that the author didn't eat due to caring too much. The after dinner speech focused on politics, which is becoming a worryingly common topic on this training tour. Luckily, everyone was saved by a nice game of Cambio before bed.

*no evidence is supplied to support this claim

Update from the late Capt. F. Bunn MCSP: "that'll be Â£20 (that's the quote, let me know if you'd still like to proceed"