Rest day (noun, archaic, \ËˆrestËˆdÄ\): The day of training tour on which everyone competes to have the least rest possible.

This definition is now archaic, because today we all awoke, took one look at the weather, and decided to be really boring. All, that is, apart from Aidan, who took several long calculated looks at the weather, reporting each in (allegedly) exhilarating detail, and thus - to his dismay - accidentally became interesting. Alas, our treasurer's tales of essays structured and precipitation precipitated were insufficient to excite most of us to much action, so instead we just drank boiling water. After an entire morning's worth of deliberation, it was concluded that it would be a bit wetter to stay inside than to go out, so we all left to go to the bay (apart from Harry, who didn't).

On the way to the bay, we came across some mini bays which had positioned themselves all over the road, which was inconvenient. These served as something of a distraction for Heather, who insisted on jumping out of the car and standing in one of them to check that it was there. Eventually, the enormous SUV-style Dobramobile, replete with taped seams, fought its way through the tides, while the non-FRA-compliant car was forced to take evasive action, conclusively proving that climate-change-induced flooding can be solved by having a really burly car, and maybe a triangular bandage. To keep us entertained on this epic journey, Aidan reminisced about the time he met a real-life side-quest character in America, who offered him 25XP to remove the chains from a campsite. Having semicircumnavigated the Gulf of Gower, we were accosted by the Mewslade Bay parking attendant - a large Minion replica, possibly homemade, which demanded a Despicable sum of Â£3 be inserted into its mouth. Horrified by the price, as well as the low quality of parking which lay beyond, the once-victorious Dobramobile was now forced into retreat, while the Cool Corden Car chose to relent to the aluminium highwayman's racket, and was rewarded with safe onwards travel.

Unable to halt his rampant exhilarating chat, Aidan was forced down a one-way path to the bae. On arrival, James remarked that it was quite wavy, which is high praise indeed from a man who spends his days in HSPS lectures. A very half-hearted attempt was made at building a dam, which had the unexpected consequence of diverting lots of water onto Aidan's previously dry shoes. Then James decided to stand on a small rock to avoid a big wave, which was obviously a very stupid idea, but no-one told him and he was promptly yote into the sea. Meanwhile, Jeremy went to climb in a small hole in a rock, and everyone else followed. To escape required some flexibility but ultimately everyone was successful, apart from Aidan, who emerged from the cave only to find himself irreversibly trapped in an unending awkward hole.

Eventually, it was time to leave the bay, which Ryan did very enthusiastically, running one hill rep* up the wrong side of the valley, and then falling back down. Inspired by this display of terrible balance, Jeremy decided that his chinos were (as everyone had been pointing out) far too white, and set about rectifying the situation in some nearby mud.

Upon our return it was Christmas, which meant it was time to chop vegetables, make Aidan sad about how hungry he was, and crush nuts by a variety of creative means. Other Christmassy activities included Heather making festive hats, Harry playing some absolute tunes, and Aidan doing fuck all. A lot of time passed, and then dinner was ready. As CUOC believes in resource distribution on the grounds of virtue, there were but two chickens to feed the ethically-compromised, and about a hectare of Nut Roast just for Paul, though most of the non-vegans also tried some to make sure it still didn't taste as good as suffering. Christmas pudding followed, and in the absence of brandy, Jeremy soaked it in vodka. For reasons unknown to our resident Master of Engineering, but apparently well understood by our completely unqualified engineering enthusiast, this meant that the pudding burned for approximately 3.5 "We Wish You A Merry Christmas"es, with all verses included. The pudding, now infused with potatoes, was still quite good, as was the custard it was accompanied by. Noting the abundance of unwanted Christmas spirit, James made some Vodkustard, which was obviously horrible, but did have a funny name. Aidan then accused him of being tipsy, which he comprehensively refuted by failing several times to articulate a coherent objection.

After some tidying up, it was that much-anticipated Christmas event - the Exit Poll. Sadly, we tuned in too late to enjoy the remix of the '79-05 election theme tune classic 'Arthur', but fortunately, we were in time to be introduced to the "GIANT" UK electoral map. Big Ben struck Ten, as did every other clock in the country, but no-one made a fuss about that, and then we got on with Sinterklaas. Poetic highlights included Aidan trying to sing along to Eleanor Rigby, Paul saying the letter 'p' many times very quickly, with the suggestion of some vowels in between, and Tom singing 'Do Trail-O' to the tune of Frozen's 'Let it Go'. This final effort, so good that Paul had texted James about it weeks earlier, was an instant classic, and we expect it to challenge "Dance Monkey" by "Tones and I" (no, me neither) at the top of the charts next week. After the merriment had at last subsided, some people went to bed, and others stayed up to watch Laura Kuenssberg say 'it is still early' on repeat in real time. 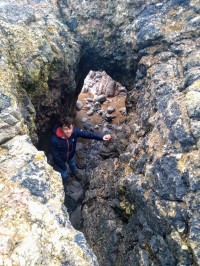 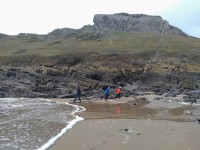 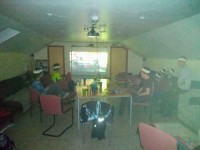 *CUOC is unconvinced that one can run reps in the singular, but since Ryan is a member of OUOC we don't mind his pursuit of meritless training techniques