This weekend marked the first orienteering action by current CUOC members (as far as I know) for *checks notes* a very long time.

On Saturday, Nottingham beckoned. Ranking among the top 7 nondescript midlands cities, Nottingham impressed with it's railway station architecture and multi-modal public transport system. Aidan took the tram because he likes that sort of thing, while James had brought his bike all the way from Cambridge in a moment of inspired penny-pinching. In spite of it's infrastructural diversity, Nottingham's cycle paths proved the faster route to the area - Clifton campus. On arrival, we both remarked on the same start list we had been gawping at all week, in much the same manner. Still stacked. Yikes. The race itself was a technical campus sprint - nothing impossible, but plenty of finicky routechoices and chances to throw away tens of seconds. In the end, Aidan came 8th in 15:30, with James 49 seconds and two places back. On the way back, James snuck onto an early train for which he didn't have a bike booking, but managed to evade the watchful eye of any veloskeptic train guards. Aidan, for once, was slower, but as far as I know also made it home uneventfully. 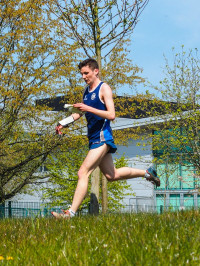 On Sunday, TVOC put on an ewent at Bradenham, site of BUCS individual 2018, where then-captain Fiona Bunn had taken a handy silver in CUOC colours. As it turns out, Fiona is something of a local celebrity in the South Central region, appearing not once, not twice, but (at least) six times on the junior squad poster hung proudly in the assembly area. We are assured that SCJS has some other notable alumni, maybe they're just photo shy? 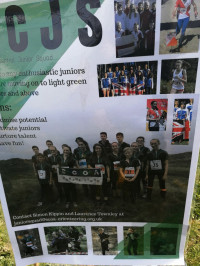 Today's CUOC representation was somewhat less decorated on the international (okay and national... and regional... and local) stage than it had been 3 years earlier. But James and Luke had high hopes for a post-lockdown renaissance of orienteering ability. They were wrong. James was dispossessed of his clean run on the way to the first control, drifting right through some surprisingly unpleasant skog to lose a minute or so. Luke is twice as good at orienteering as James, so he [CENSORED] it up at number two instead. Little joy was to be found for either from then on, each limping home far from gruntled to finish 12th and 7th respectively. A rather quiet drive home followed, punctuated briefly by a further navigational blunder on the M25, leading to a quick visit to Hemel Hempstead (birthplace of Harry Winks, don't you know) before the mournful silence could resume.

The return of orienteering is of course welcome, but CUOC are especially encouraged by the familiar embrace of bang average runs all round, and look forward to continuing in this vein throughout the delayed season.