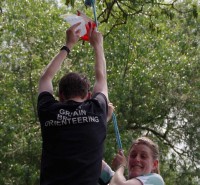 On a fortunately dry Wednesday halfway through May Week, almost a record number of CUOCers met up on Grantchester Meadows for an afternoon of fun, crazy orienteering, cows, cow poo and food. The Orienteering part consisted of a group contest, where each group had a blank map and a sheet of photo clues which showed the location of the controls and held the key to finding out the controls. To make matters more interesting, some controls were on (or under) water. Any method of transport could be used, including bikes and a punt. While most people resorted to using the punt in getting to the water controls, some eventually braved the water themselves and so indirectely fulfilled the organizer's secret hope of making somebody fall into the water besides herself.

The race was rounded off with a wheelbarrow/hopping race to the last control which required that teams have half the number of legs and half the number of arms in the team touching the ground while racing to the control. Unfortunately the intended treat at the last control- TRINITY MAY BALL TRUFFLES, melted due to the heat and instead acted as a deterrent. The desire to reach the finish first was intensified as competitors were not only pursued by their rivals but also by a herd of cows that evidently had not yet seen wheelbarrowing orienteers. After the adrenalin rush everyone gladly huddled around Matthew's five barbecue stoves. The 18 hungry orienteers were surprisingly not hungry enough to finish off all the burgers so we got a chance to organize a 'free' CUOC lunch the next day. PS: It was Rapahelle's birthday this Friday so if you didn't know yet: 'France est cool!'