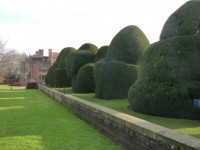 A great day of racing around York university consisting of heats in the morning followed by a hotly contested final in the afternoon gave way to some good results from CUOC. Mairead Rocke was the only member to make it through to the A final, for the top 18 runners from the heats. Despite being disappointed with her run, she still finished 12th overall. Katrin Harding ran whilst ill and didn't make the A final, but finished a respectable 8th in the B.

Against very tough competition, no CUOC men made it to the A final. In the B final, Ben Windsor made some time losses in the first part of the course, but pushed hard around the rest to finish 8th, 72 seconds down on winner Peter Hodkinson who was sporting a trial version of Oxford's new orienteering top which included Oxford's skyline coloured in a rather vile shade of dark blue - but CUOC need to watch out if the new tops make them all run like this! Tom Dobra had an excellent final in his debut British Champs to finish 55th, with a time of 15:11. Matthew Vokes avoided slipping in any goose poo, but was disappointed with several mistakes, finishing 24 seconds later.