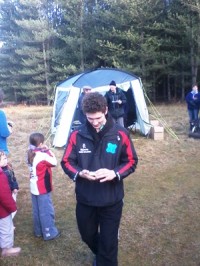 Congratulations to CUOC's Mark Salmon who won the M20 category in the East Anglian League! Mark headed a CUOC 1-2-3, with Tom and David close behind in a hotly contested class of three. Salmon was presented with his EAOAscar in front of a crowd of adoring fans at a glitzy award ceremony in Thetford Warren. Speaking on the green carpet, Mark said "stop cheering guys, it's really embarrassing. I didn't know I'd won anything. What is the East Anglian League anyway?"

The support act to the awards ceremony was the East Anglian CompassSport Cup Qualifier. The CompassSport Cup is an inter-club competition aimed at open clubs with regional heats before a national final. To do well you need to have a very wide range of age classes, so it wasn't worth CUOC entering. Many of our runners who don't have a 'home' club decided (with just a little persuasion...) to join WAOC for the occasion, and helped WAOC to a win! They also looked unbelievably cool in the super-snazzy WAOC club kit. 9 CUOC / WAOC runners pitched up thanks to a fleet of lifts. Special mention to Mark (4th on Brown), Harriet (6th on Blue Women) and Tom (9th on Blue Men).

The good news is that everyone will now be subjected to even more of WAOC's best persuasive powers to get a good turn out at the final, which is somewhere up north on 30 September.