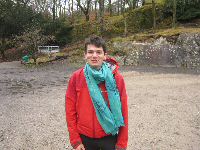 Has anyone lost a blue/green scarf with a tree pattern?

Here is John modelling it, if you wanted to know what it looked like:

Apparently it belongs to Steph, and will be returned soon

Harriet is happy as ever

Harriet (DRONGO) has just gone through the spectator control. She never seems to stop smiling.

Sam (CUOC) appears to have been crawling round his course. Here he is at the spectator control. 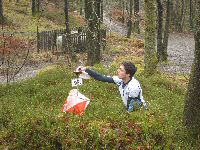 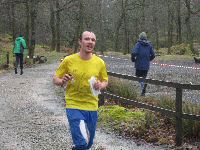 Dan (CUOC) has just finished his 2nd course out of 3. Unfortunately he was unable to find anyone who wanted to be in a team with him, and decided to run the entire relay on his own.

Ben (DRONGO) has just done a demonstration of the hand-over procedure. We have learnt that the gravel in front of the hand-over tape is highly dangerous. All runners must take care not to fall over.

The first car to leave have just phoned to say they don't have the key to the hall. We've just found it by the download box. Oops

Andrew has just joined the 250 club but is back safely. The organiser has sent the control collectors out

A brief lull in the rain and people are gathered in the car park. David Rosen has been spotted. Perhaps he is the IOF advisor. Unfortunately he went to Oxford

Hope everyone traveling by train manages to make it to the hall.

If National Rail is to be believed, Fingal is now on the 23 minutes delayed train to Grange-over-Sands. Natalie is delayed somewhere, and Joe is probably enjoying the West Coast mainline (but not as much as the Toms would!)

If anyone gets stuck in Lancaster this evening, give me (JohnO) a ring (not a text - I might miss it), and I'll give you a sofa to spend the night on!

And I was right about the train delays only increasing...

Emma's train is running about 18 minutes late. National Rail thinks it will arrive at GOS only 16 minutes late, but this seems unlikely.

Natalie and Fingal are on the later train. This is now also running late. National Rail think it will arrive at GOS only 2 minutes late.

CUOC's current resident train expert Tom Leach commented: 'Whilst I do love trains - they tend to have a habit of being late in this country. Unfortunately I can't make it this weekend, but I would have used the trains if I was going'.

Just checked the weather for tomorrow. Yellow weather warning of wind issued for Cumbria. And it might rain a bit too :(. Oh well, it is the Lake District. 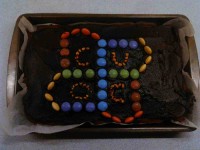 The icing has just been put on the cake - something to look forward to after the run tomorrow.

Just received a text from Fingal who will now be arriving at Grange-over-Sands on the 22:30 train. Hopefully he will meet Natalie on the train

Matthew has informed me by text that a revised start list has been put up at the hall. As I'm not at the hall it isn't terribly helpful. Fortunately I know the start list anyway...

After mending a bug with the website, the live blog for the orienteering Varsity Match 2015 is now up and running. Look out for further updates over the course of the weekend.