This year the Varsity Match took place in the Lake District. Despite most of the southern Lake District being embargoed for the JK, the planners and organisers had somehow found areas for the races. The individual race was held at Hampsfell near Grange-over-Sands, and relay was held on the fantastic area of Great Tower.

Most of the team made their way to the Lake District on Friday, although the trains were causing problems on Friday evening. On arriving at Preston station, Joe had missed the last train of the night to Grange-over-Sands. Whilst waiting for the railway people to organise a taxi, he was involved in breaking up an argument between two drunken primitives arguing about the ownership of a handbag. Fortunately, a taxi was organised.

Saturday morning started with driving rain. Fortunately shortly before the first start, the rain eased off and people gathered in the car park. Ben Windsor arrived with the Varsity Match programmes which contained amusing profiles about all the competitors. As we arrived at the assembly area, the first alumni were returning from the forest. A few clues were dropped about the course, or more specifically the weather around the course. Vokesy was pleased to hear that it was still foggy and windy on the top of the area.

Whilst Oxford were still complaining about cagoules being compulsory, the first CUOC starters on the Menâ€™s course set off. They were shortly followed by the rest of the competitors in the Varsity start block.

In the Womenâ€™s race Andrea was first to return from the forest. Helen arrived 6 minutes later, with Carrie a further 6 minutes behind. As all the Oxford women were still in the forest it was easily apparent, that the Women had won again. Well done girls!

On the Menâ€™s course Fingal was first back from the forest on his debut run in a Varsity Match. Apart from some bad luck (or orienteering?) at control 13, he had a good race for someone new to orienteering and the club. Someone to look out for at future Varsity matches. Sam, Dan and John returned from the forest over the next 15 minutes. 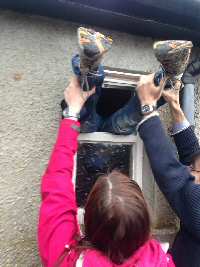 When nearly everyone had finished, Oxford ran away to get showers, whilst some of CUOC stayed to collect controls. The sun came out as the last controls were being collected. Shortly afterwards Vokesy received a phone call to ask where the hall key was. â€œDo you mean this key?â€ said David, fishing the key out of the box with the download station. Unable to wait for the key to arrive, Rory found an unsecured window to break into the hall. He had to be lowered through, head first.

After visiting some random campsite to use the showers we made our way to the accommodation. Unfortunately Matthew had chosen a gated road, and John was in the front passenger seat with a large rucksack on this lap. After two more gates that would have been nice, we finally got to the village hall.

Whilst the rain persisted preparations were in place for the boat race. After much faff by the social secretaries or whoever could be bothered to take their place, the format was finalised and teams were selected. With a team full of recently graduated students, DrongO won the race for the first time ever. Enough has been said about CUOCâ€™s drinking performance. Ex-social secretaries have suggested that trials for the boat race team should be reintroduced. It was also suggested that â€œbest pint downing timeâ€ should be reintroduced to the membership form.

The infamous trio of HAMISH were reunited. Having drunk a whole pint in the boat race, the HA part was even louder than normal. It was probably better than her squash downing before the 2013 Varsity Match. MI and SH did not feel the effects of the alcohol in the same way.

The Varsity banquet was held in the village hall. The catering company had been used when CUOC organised BUCS and we had been promised there would be lots of food. The social organiser was true to his word, and everyone was well fed. Pudding was the local delicacy of Cartmel Sticky Toffee Pudding - David had collected 9kg on the way to the social. Despite the best efforts of hungry orienteers, 9kg was too much and some had to go home in Benâ€™s car. John and Matthew recreated a scene from the kitchen in Sweden, creating a ccp lattice with the pudding bowls. An efficient system of custard, (ice) cream or both meant that everyone was quickly served. There were 6 CUOC Men's Captains (John, James, Matthew, David, Ben and Adam) in the room at one point, which is quite a lot.

A certain member of the Oxford team was last to get up, and only did so when there was a threat of breakfast being cleared away. The same person was also last to make his lunch, pack away his stuff and didnâ€™t help with clearing up the hall. All guesses to the (webmaster)...

Having left the hall in a reasonable state we headed off to the fantastic area of Great Tower. Ben Windsor gracefully demonstrated the hangover procedure - falling over just before the line. The teams had all been mixed and contained members of CUOC, DRONGO, JOK and OUOC (listed in order, best first). John, Dan, Carrie and Fingal were on first leg and in the mass start. Matthew had rolled the maps very tightly to make sure no-one could read the 100 character code that described which gaffle they were on. At the first control it because apparent that Dan was still struggling to open his map. When he finished the only part still intact was the original label that had been used to secure the map.

On the second leg, Dan was first through the spectator control. He stayed at the front for the rest of the courses, and Secret Sauna Society (donâ€™t ask what he does during secret saunas) was the first to finish. The Long Rod Squad and Team James were 2nd and 3rd to finish. The next five teams all finished within three minutes, so Mr Marsdenâ€™s teams exceeded the expectations.

Everyone had a really enjoyable weekend, so we would like to thank a few specific people who put in a lot of effort. Thank you to Matthew for planning, David for organising, Ben for testing his social skills, Quentin for controlling, and to WAOC and CUOC for lending equipment.